DESPITE its seemingly unpronounceable name, the Qashqai (pronounced kash-kai) is the car which Nissan believes will put the manufacturer firmly back in the UK fleet arena.

Unveiled in Paris last week, the Almera replacement goes on sale in the UK in February and half of all UK sales, expected to reach 17,000 units next year, will be to fleets. Full-year sales from 2008 will potentially top 20,000 units.

It will be offered with the choice of four engines – 1.5-litre diesel, 1.6-litre petrol and 2.0-litre petrol or diesel. All are front-wheel drive but for an extra £1,200 buyers of the 2.0-litre models can opt for Nissan’s ‘all-mode’ four-wheel drive system. Gearbox options depend on engine choice but include a five-speed and six-speed manual, a new six-speed automatic and a Continuously Variable Transmission (CVT) option.

The car is described as ‘sitting between lower-medium hatchbacks and SUVs’, with a Nissan spokesman adding: ‘It will cater for those drivers who want a more dynamic design than that offered by a traditional lower-medium car, but who are not attracted to the large, aggressive nature of a compact SUV.’ 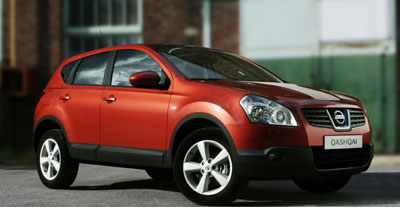 Nissan’s fleet director David Murfitt expects the car to fill up many a company car parking space across the country.

He said: ‘We see the Qashqai as being the car which puts us back into the core fleet market. It’s a very exciting launch for us.

‘It’s at the top end of the lower-medium segment so if we had to pick just one rival it would have to be the Volkswagen Golf, but it will also go up against the Ford Focus and Vauxhall Astra.

‘We expect it to be a popular car with fleets, making it on to many choice lists. We’ll start to take it around to contract hire and leasing companies soon and we’ve also had some residual value specialists looking at the car.’

Fleet executives are currently weighing up the benefits of putting the vehicle into daily rental but if they do they say it will be a limited volume only. 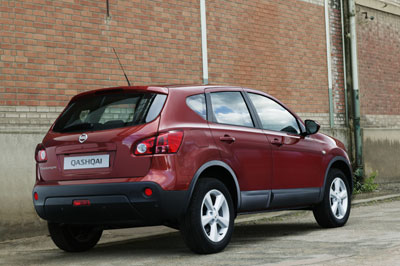 Launching the car in Paris, Nissan president and CEO Carlos Ghosn said: ‘Qashqai combines the athletic poise of a sports car with the confident stance of an SUV – an assertive presence on the urban road but not unfriendly or intimidating.’

The launch has also given the UK car industry a major boost as Ghosn revealed it would be built in Britain at the manufacturer’s plant in Sunderland.