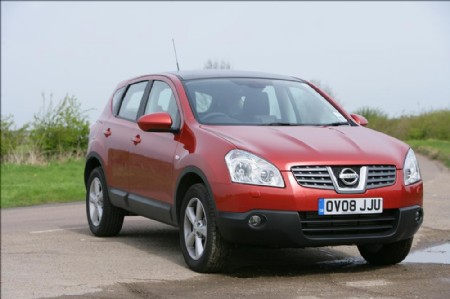 The first time I got behind the wheel of the Qashqai it felt like I was driving a minibus.

Partly because its four-cylinder diesel engine is a tad noisy in lower gears and partly because I’m – how should I put this? – vertically challenged.

When I learned to drive, my instructor plonked me on a cushion because the seat couldn’t be raised and she was worried I wouldn’t see over the bonnet. And that was in a Nissan Micra.

So you can imagine how big the Qashqai felt.

But by my second outing I loved its dominant road position.

Rather than seeing it as a huge beast I thought, ‘wow, look at the view’.

And really it’s not that big.

This is the sticking point for some roadtesters.

They suggest the problem with the Qashqai is that it doesn’t know what it is.

But I’m inclined to agree with Nissan and say that it’s ‘distinctive’.

I like its chunky front end and its neat rear.

And the judges of the 2008 Fleet News Awards – who voted the Qashqai the best small family car – agree.

They described its look as ‘individual’.

They also praised its running costs and in terms of safety it scores highly – a faultless five-star Euro NCAP rating for adult protection and four out of five for child protection.

The Qashqai also has plenty of gadgets.

First off, there’s the intelligent key.

It’s a blessing for those who find it too much hassle to root around in their bag or pocket for their car keys.

Simply press one of the buttons next to the door handle (with the intelligent key nearby) and the doors unlock.

Starting the car isn’t quite so simple.

A colleague who drove the Qashqai before it became my long-termer was baffled by it.

But a quick glance at the manual solved the problem.

It won’t start unless you put your foot on the brake and then turn the ignition knob.

If you put it in reverse another handy gadget sparks into life – a rear parking camera.

The Qashqai is also equipped with dual-zone climate control, a six-CD in-dash auto-changer, heated front seats and an auto-dimming mirror, which means no more headlight glare from the vehicle behind. And did I mention the panoramic roof?

It’s no wonder the Fleet News Awards judges said it was well equipped.

Now, to the really important question – how does it drive?

To put the Qashqai through its paces I took it down the A1(M) and A14, en route to Ipswich to see my local speedway team Peterborough Panthers take on the Ipswich Witches.

It was my best motorway experience yet – the ride was smooth and the car felt solid on the road so I wasn’t intimidated by the lorries thundering along.

I didn’t test its claimed maximum speed of 108mph but I did try out the six-speed gearbox.

And in terms of acceleration, it reaches 62mph from rest in 12.2 seconds.

At least the journey gave me the opportunity to test the satellite navigation, though.

Here’s where I may have found a slight problem with the Qashqai.

There doesn’t seem to be an option to put in a postcode as your destination.

Instead, you have to choose a city, then a street, then a house number.

What if it doesn’t have a house number?

Well, the closest the sat-nav will get you is the right street.

My next challenge – when I’ve mastered the sat-nav – will be to test the Qashqai’s roominess.

One criticism from road testers has been the lack of headroom in the back. So my 6ft tall brother may find himself in demand.

As for me, at 5ft 2in, I’m going to be enjoying the space in the driver’s seat.

And with all the adjustments you can make there’s one thing I won’t need – a cushion.

The manufacturers view
After almost 18 months of sales, Qashqai’s new car demand has been mirrored by an equally high residual value position. This, combined with other running costs, means a very low cost of ownership for our customers.

Qashqai’s success has re-opened many doors for us with corporate clients – its product strengths have caused customers to re-evaluate their perceptions of Nissan and, consequently, demand for all our products has increased.
James Douglas, fleet director, Nissan Motor GB