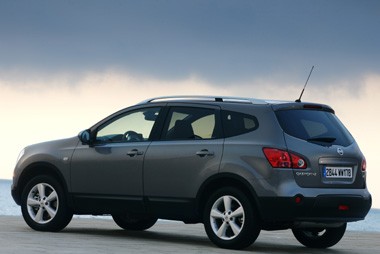 Nissan knows it is on to a good thing.

Not surprisingly, Nissan wants to ‘qash’ in on this success by introducing a seven-seat version.

Paul Willcox, managing director of Nissan GB, says the aim of the Qashqai+2 is to “broaden their offering”.

“We’ve tried to bring something to the market that’s a bit more styled,” he said.

“We’ve not just fitted a box on the end to make it bigger – the whole car has been redesigned from the A-pillar backwards.”
So, what are the differences?

For a start, the wheelbase has been increased and there’s more headroom in the front and middle row of seats.

Both the front and rear doors have been restyled and there’s a sleek new grille, exclusive to the Qashqai+2.

The third row of seats is foldable, creating around 500 litres of luggage space, compared to the regular Qashqai’s 410 litres.

It’s this extra space that Nissan hopes will appeal to company car drivers with families and take on the likes of the Vauxhall Zafira and Renault Grand Scenic.

Nissan expects to sell 9,000 a year, with around half going to fleet buyers.

The +2 mirrors the engine, transmission and specification line up of the regular five-seat model, with two petrol units and two diesels – the 1.5 and 2.0 dCi turbodiesels.
Behind the wheel

My long-term test car is a five-seat Qashqai, so I was keen to find out whether the Qashqai+2 really does have the same driving performance.

Well, Nissan was as good as its word – it does. Despite the extra 211mm in length it handles well in corners and gives a smooth ride.

With 148bhp from the 2.0-litre dCi turbodiesel engine it doesn’t quite have the power I’d like but is more than adequate for those after a family car rather than a sporty number.

What about the extra row of seats?

They certainly weren’t roomy enough for adults but space is suitable for children, as Nissan suggests.

It wasn’t immediately obvious how to put the seats down but once I’d found all the right levers it was easy.

If you like the Qashqai’s looks but want that extra capacity, then this is the car to have.

The +2 builds on the attributes which have made the regular model such a sales success, but adds increased practicality into the mix.

Those 9,000 sales should be easy to achieve.