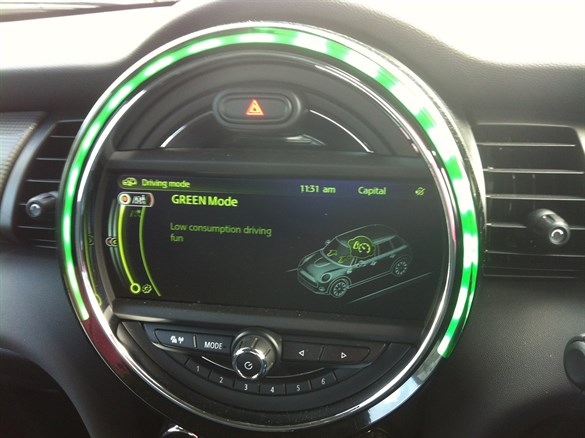 Gear shift indicators are becoming more common on new cars, but our Mini takes this a step further with other eco-driving hints when the ‘green’ mode is selected.

To put the Mini into green mode you simply flick the rotary switch at the base of the gear stick and a message pops up on the display promising ‘low consumption driving fun’.

I’ve generally been testing the Mini in the default ‘mid’ model but on a recent 200-mile round journey I put it into green mode to see what impact it would have on my average mpg.

Prior to setting off it was 51mpg, but at the end of my journey this had increased to an eyebrow-raising 66mpg – 8mpg below the
official combined figure.

The improvement was largely down to the route and the speed I was driving at. My normal 12-mile commute is mainly dual carriageway and I usually achieve around 50mpg, but for most of my 200-mile journey I did 50mph, or below, rather than 70mph.

When I went above 50mph an arrow appeared on the instrument cluster reminding me to reduce my mph and the bar tracking how
efficiently I was driving changed from green  to grey.

If I accelerated too harshly, the symbol of a trainer pressing against a pedal popped up.

Given the difference in mpg, I’m now planning to do all of my driving in green mode. But the trouble is the Mini doesn’t have as much oomph in this mode and isn’t as much ‘fun’ – despite Mini’s promises.