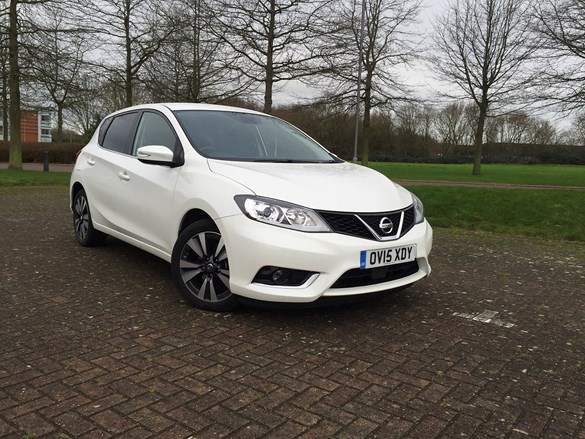 After nearly a year on our test fleet, it’s time to say goodbye to the Pulsar N-Tec. It’s not just goodbye to our car, though – in the latter months of the test, Nissan has replaced the N-Tec technology-focused trim level with the new N-Connecta trim (for which the spec is shown on this review).

The changes are mostly in name – though sadly the new trim omits the LED headlights that I found provided a really clear view of the road ahead.

There’s a small list price increase, too, from £20,895 to £21,115. The new model fails to rectify the curious omission of parking sensors, only including a reversing camera. The camera isn’t great either, getting mucky rather quickly and with a fairly low resolution (see below).

But these are fairly minor bugbears on an otherwise good car. It’s difficult to describe it as anything more than ‘good’ though – there’s nothing wrong with it but, as we’ve mentioned before, it’s fairly uninspiring.

It soaks up long motorway journeys with ease, returning impressive fuel economy from 55-60 depending on the driver, with seats that remain comfortable throughout, with little sign of aches and pains. That replacement trim level also adds lumbar support in the front seats.

The choice of C-sector hatchbacks is fairly crowded – and many buyers of those vehicles have instead opted to move into crossovers like its sister Qashqai. However, the Pulsar is a solid offering – even if it elicits little emotion from its drivers.