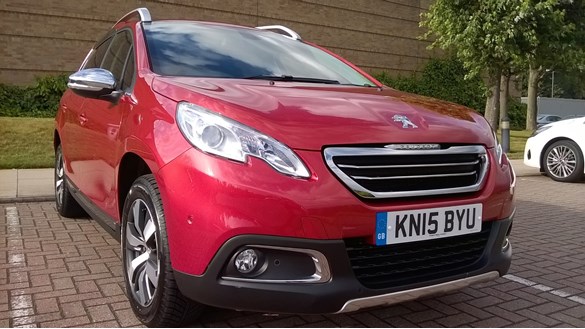 The Peugeot 2008 has been a car full of surprises since it joined our test fleet and, so far, all of them have been good ones.

Although it is labelled a compact crossover and is based on the 208 supermini, I was pleased to find that it didn’t feel particularly diminutive. The addition of a 0 to the name brings a body that is 25mm wider, 200mm longer and 96mm taller, while it also rides 165mm higher.

The combined impact is a much more roomy car than I was expecting, and I will be putting that space to good use during this test.

From the outside, there seems to be very little resemblance between the 2008 and its smaller sibling. The larger body emphasises its crossover genes, helped by stainless steel front and rear scuff plates and roof bars.

As the name suggests, the 1.6-litre diesel engine comes from Peugeot’s ultra-economical Blue power unit range and as such offers a claimed 76.3mpg, but with enough power to reach 62mph in 9.6 seconds.

An additional benefit of the clean engine is emissions of 96g/km which means zero road tax for the foreseeable future and low benefit-in-kind tax of just over £50 a month for a 20% taxpayer and around £100 a month for 40%.

There is a low-set steering wheel that you look over, rather than through, to see instruments and a seven-inch touchscreen that removes the need for too many switches.

One key addition is a dial to control our car’s grip control function which can be set for ‘snow’, ‘off-road’, ‘sand’ and ‘ESP off’. As the dark nights close in, passengers will also be able to enjoy a final feature on our 2008: the LED Track, which is a laser cut headlining with backlighting that swoops down the interior. It doesn’t serve a purpose, but it makes the interior feel that little bit more special.