Peugeot has spent more time and effort launching this car to the fleet industry than any other in its history, and it is easy to see why.

Spacious and light, with a range of low emission engines and claims of improved quality, the firm hopes it will prove a big hit with user-choosers, with more sales coming through richer mix, profitable leasing company business and not drop off the radar as the 307 did after a bright start.

The 308 certainly feels very large and airy in the front, thanks to what Peugeot calls its ‘semi-tall architecture concept’, although space in the rear didn’t seem anywhere near as generous.

From the driver’s seat it feels like you are driving a mini-MPV because of the large amount of glass around you and the high-ish seating position.

I’m not a big fan of that, mainly because I prefer to be hunkered down, snuggled low in a car, but that’s a personal preference and you can’t deny that Peugeot has certainly set out to do what it intended.

Interior build quality and materials are certainly a step up – possibly a whole set of stairs up – from the 307 and Peugeot can reasonably claim that it is now competing with the very best in class.

The chrome-ringed dials and vents and soft touch plastics of the dash and doors all have a premium feel.

The only letdown is the centre console, which is made of perfectly good silvery plastic but each unit, for climate control and entertainment, doesn’t line up well and has some give.

And on the subject of quality, will somebody please give PSA Peugeot-Citroën a decent-feeling gearbox?

There’s nothing inherently wrong with the five-speed unit in this car, and it snicks into each gear accurately enough but then flops back to the centre, above third, from fifth or first.

It makes it feel baggy, and makes you wonder what on earth it’s going to be like after 60,000 miles, when in fact it might well be no different at all.

Overcoming problems with perceived quality is a damned sight harder to rectify than problems with actual quality, and in this sense the 308 does itself no favours.

One thing that doesn’t need changing is the 1.6 HDi engine, which is as excellent as it has always been.

Although it only has 110bhp, it doesn’t ever feel like it is struggling and has a quiet, soft quality about it. In fifth on the motorway, you don’t feel like you are missing a sixth gear either.

As for handling the 308, with its upright stance, does have that odd sensation of most Peugeots that it rolls a bit through corners because you are sitting slightly higher than in other cars, but in fact if you line the dash up with the road, it’s perfectly flat and composed.

It also rides nicely and while it’s not a car that inspires you, it does a very good, unfussy, solid job.

Perhaps the only complaint would be the steering around the straight-ahead position which has an odd heavy, lifeless feel to it and requires fairly regular corrections. 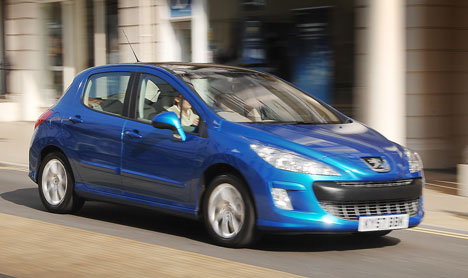 In the first quarter of the turn it feels like you are working against the resistance of a very strong spring.

The 308 doesn’t stir the soul in any particular facet but is a good all-rounder. Whether that will be enough to see user-choosers flocking to it remains to be seen.