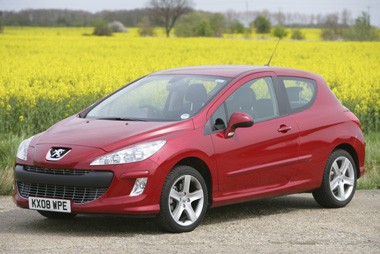 Peugeot has been busy with its 308 range in the past few months, launching the hatchback and then adding the practical SW estate.

But away from the more prosaic versions, the French manufacturer is injecting some glamour into its core lower-medium family offering.

The CC folding roof convertible has just been announced and will make its world debut at October’s Paris Motor Show.

Peugeot has also confirmed that the rakish RC-Z coupé will make it into production in 2010 to do battle with the likes of the Audi TT.

Injecting some glamour into the 308 family comes at a time when the marque’s endurance racing cars are performing well on the world’s circuits and running Audi close in the legendary Le Mans 24-hour race.

So, have Peugeot’s racing exploits transferred some desirability into the core hatchback range?

Well, from my perspective our Sport specification three-door model looks great, with plenty of curves and contours.

Yet despite the sleek design there is something definitely masculine about the car. With its long snout-like bonnet and huge sweeping headlights it seems almost predatory.

I was equally impressed inside. The interior looks great, the black cloth upholstery has a sexed-up, trendy look and the front seats are comfortable and figure hugging.

Peugeot has deliberately angled the 308’s sloping dash to create the illusion of more space up front, and it succeeds.

Even without the benefit of a sunroof, the car really manages to feel
light and roomy on the inside and the environment seems airier
still thanks to the huge MPV-like windscreen.

I’m yet to take a full load out to test the car’s overall passenger comfort and, though the front of the 308 is a pleasure to be in, I have my suspicions about the cramped-looking rear seats.

Our long-termer comes with a snazzy multi-media system, complete with built-in satellite navigation and Bluetooth connectivity as fitted options.

However, the centre console is a bit awkward to use while on the move, with lots of small buttons that are easy to miss while concentrating on the road and dials positioned off to one side, which are not ideal for people with short arms.

The five-disc CD changer is proving useful, given my complete lack of tidiness (CDs often live on the floor) and the 308’s shortage of cabin storage space.

The glovebox is a small, awkward shape, lacking enough room for my music and random knick-knacks.

However, the sunglasses holder above the driver’s door is a useful little touch.

In light of my aforementioned messiness at least I can always find my shades.

The only other minor gripes I have with the interior are the rear windows and the absence of a clock on the main console.

The curved rear windows look great and complete the sweeping, purposeful appearance of the rest of the car, but coupled with the high head rests they also restrict visibility.

That means you have to lean out to securely check your blind spot.

The boot capacity, however, is a serious plus and has more than enough space for the sports gear, kit bags, camping paraphernalia and overnight stuff that I chuck in it every weekend.

As daily transport, the car is a solid performer.

The steering and handling is competent, if unremarkable, and with its 136bhp 2.0-litre diesel engine the 308 is fun to drive.

The car has also got a set of phenomenally efficient brakes, which can only be a good thing, and it took me a few jerky stops (nearly catapulting myself through the windscreen) to get a good feel for them.

My only real issue with driving the Peugeot is its rather vague and floppy manual gearbox.

It’s taken me a couple of weeks to feel fully confident and positive when changing gear.

Emitting 146g/km of CO2, the 308 Sport is not the greenest hatchback on the road.

However, in these times of spiralling fuel costs it is still on the economical side, averaging 48mpg.

First impressions of the 308 are definitely favourable and, dumbstruck by the car’s sleek and powerful body, friends of mine have openly voiced their envy.

Aesthetically, it packs a punch for a family hatchback.

This is a car that both looks and feels like it means business.

So far, apart from a few niggles, the 308 has provided an enjoyable driving environment and has performed well and without incident.

I look forward to getting to know it better.