PEUGEOT’S new 407 Coupe has a hard act to follow. When the French manufacturer decided to turn its previous 406 upper-medium saloon into a coupe, it tasked legendary design house Pininfarina with the transformation.

The result was a pretty, cleanly-styled coupe which gave Peugeot a foot in the door with user-chooser sales.

Step forward the 407 Coupe, this time styled in-house and, it has to be said, with less of the elegant simplicity of the 406.

Part of the problem is that Peugeot’s design team had to retain the front-end look of the 407 saloon and SW models.

This means the overhanging front and gaping mouth, but now augmented by a wide-mouthed grille and shark-like gills in front of the wheel arch. The foglamps are recessed into the front bumper, and sharper shoulders at the top of the bonnet create a more taut shape. 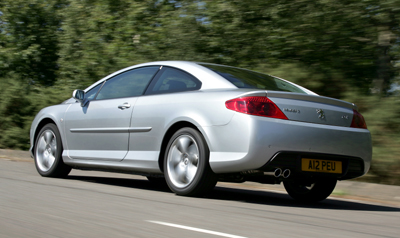 The back is also new, with a great slab of rear bumper and large tail lights.

Peugeot is pitching the 407 Coupe as a grand tourer to rival premium rivals in the form of the BMW 3-series coupe and Mercedes-Benz CLK, not only in size and ability, but also in price – the top-spec 407 Coupe costs nearly £31,000.

The result is sleeker and easier on the eye than the saloon, but is unlikely to match the reaction to its Pininfarina predecessor.

A 2.2-litre four-cylinder petrol engine is due later in the year, offering 163bhp and 165lb-ft of torque.

Transmission options are a six-speed manual gearbox for the petrol models, or a six-speed automatic in the V6 models.

The next step up is the SE, which adds leather heated seats, a JBL sound system, a six-CD changer and 18-inch alloys on the V6 models.

The top-of-the-range trim is the GT, which adds colour screen satellite navigation and a leather dash.

The 407’s forerunner, the 406, saw the majority of its fleet models powered by the 2.0-litre petrol and the 2.2-litre HDi turbodiesel engines. Most were bought by user-chooser company car drivers.

Peugeot is expecting a similar trend with the new 407 Coupe, focusing again on user-choosers who will account for around a third of buyers, with the 2.2 petrol and 2.7 V6 diesel expected to be the big sellers.

With UK supply in 2006 restricted to 2,500 cars, only a few hundred are likely to find their way into fleets this year. The main trim level is likely to be the SE.

SLIP inside the 407’s cabin and breathe in an air of quality. Whatever my misgivings about the exterior design, the interior of the GT-spec car is nothing short of sumptuous.

The range-topping diesel V6 GT has every conceivable gizmo, and a sat-nav/entertainment computer housed in the dash that will be instantly recognisable to anyone that has driven a recent Citroen or Peugeot. The interface is well-designed and intuitive and the various knobs and dials have a feeling of sturdiness to them. 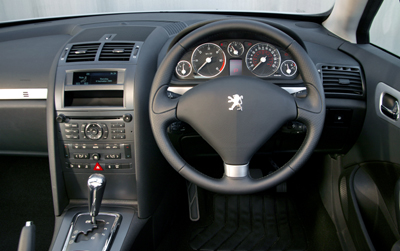 The test car was clad in black leather and the high-quality plastics and animal skin contrast beautifully, particularly on the muscular-looking dash.

The main instruments lurk beneath a browed binnacle, while the steering wheel is fully adjustable and is beautifully tactile, if slightly chunkier than might be expected. Peugeot has managed to reach a balance of space and cosiness that feels just about right. Everything is close to hand, but there’s plenty of room for four tall adults.

Although 205bhp sounds like a fair bit of oomph, the weight of the car reins the potential in a little. With a kerb weight of 1.8 tonnes, the diesel V6 has considerable bulk to haul around, but having said that performance is still spirited.

Peugeot has put double glazed windows into the 407 Coupe, which combined with an already quiet engine brings road noise down to almost nothing.

IT may not be the most frugal or eco-friendly of machines, but the 407 Coupe is comfortable, easy to drive and well able to keep its driver happy over the course of long journeys.

However, until the cheaper 2.2 version arrives, it remains expensive when compared with BMW’s 3-series coupe. 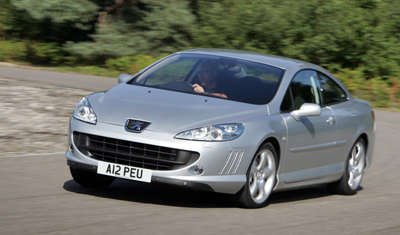