IF ever there was a paradox among cars, the Porsche Cayenne is it. In all the new model launches I’ve attended over the years I have never, in one car, completed several spirited laps of Brands Hatch, thrashed round a gravel and mud rally stage and waded up to the doors in water on a challenging off-road course.

But that’s the nature of the Cayenne, now comprehensively Porsche’s best-selling model. 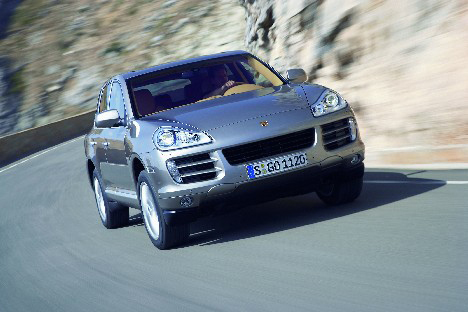 For 2007, it’s been revised with new front and rear treatment, bigger engines and some clever electronic trickery which improves further what were already pretty amazing dynamics for such a large and heavy car.

When the Cayenne was launched in 2003, the gasps of admiration for the car’s abilities were tempered somewhat by highly vocal criticism of its looks. So now, a new front end with slimmer headlights and revised grille treatment have given it a less brutal appearance. At the rear, new lights, rear bumper and tailpipes complete the restyle, though the whole car could still hardly be described as pretty.

All three engines increase in size: the V6 in the Cayenne grows to 3.6 litres and 290bhp, while the V8 in the Cayenne S is enlarged to 4.8 litres and 385bhp. At the top of the range, the Cayenne Turbo uses a twin-turbo version of the V8 developing a thumping 500bhp and no less than 516lb-ft of torque from just 2,250rpm.

Porsche’s engineers have also been working to harness the extra power more effectively, and the result is Porsche Dynamic Chassis Control (PDCC), an option which has to be ordered in conjunction with air suspension at total cost of £4,113 on Cayenne and Cayenne S (air suspension is standard on the Turbo), so PDCC adds ‘only’ £2,140 to the £74,898 price tag.

PDCC adds even more precision to the Cayenne’s handling. Both old and new examples of were available for test, and the extra sharpness of the new PDCC-equipped model was impressive around a coned slalom course.

Off-road, there’s generous suspension articulation, and you can hear the electronics working hard to control traction and descents in really slippery conditions.

On the track, the Turbo is a revelation, with handling that belies the car’s size and weight. With such phenomenal power, there’s no shortage of performance either: top speed is a seemingly unfeasible 171mph, with 0-62mph covered in a Tarmac-stripping 5.1 seconds. Even the entry-level V6 is good for 141mph and 0-62mph in 8.1secs, while the S manages 157mph and 0-62mph in 6.6secs.

Admirable for its sheer engineering achievement, the new Cayenne truly is a jack of all trades. The difference is that, far from it being a master of none, it impresses in a way you wouldn’t believe possible for a 4x4, and puts an end to the compromise that most SUVs pose in the balance between on-road and off-road ability.