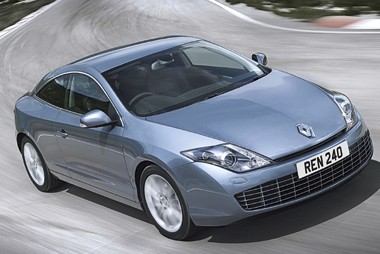 It’s very rare to get into a car and for it to feel alien. Most models conform to a set of parameters in terms of ride and handling, but in the case of the new Renault Laguna Coupé you really do feel somehow out of sorts for the first few miles.

The reason is the very clever 4Control chassis fitted to GT specification Laguna Coupés such as the one on test.

Essentially, it is a four-wheel steer system which allows the rear wheels to either turn in the opposite direction to the fronts to aid low-speed manouevring, or mirror the action of the fronts at higher speeds to make the car more stable.

And it all works brilliantly, once you get used to its feel. At low speeds, and especially when trying to move around a tight car parking space, the effort needed from the driver is much reduced.

But I was caught out several times when circulating a roundabout – I simply put too much lock on the wheel to go round and was then forced to take some off as it became clear I was heading for the kerb in the middle.

Such directness is uncommon in modern day vehicles – the last car I drove that turned-in so quickly was a Ford Racing Puma.
The 4Control system makes the Laguna Coupé a great car to drive – secure, direct, comfortable and, above all, safe.

There’s a range of engines to add to the enjoyment, and our test car is fitted with the 2.0-litre diesel offering 180bhp.

Again, it’s good news because this engine is a peach. Little in the way of lag, smooth power delivery, low noise intrusion and huge puddles of torque available for effortless acceleration.

The six-speed manual gearbox fitted feels a little baggy in its action, but this fails to spoil what is a very accomplished car.

And then there’s the looks. Some sections of the media have panned Renault for its styling of the Laguna, especially at the front-end. I don’t find this look anywhere near as offensive as some of my colleagues, and for the Coupé it is little changed in overall appearance.

The big difference comes at the back, where a pair of thin light strips and a little ducktail spoiler dominate. There’s a definite trace of Aston Martin to the look, and the tight design gives it an air of sophisticated simplicity.

The Laguna’s pricing sees it sit plum between the volume and premium marques, so will the looks and kit be enough to tempt user-choosers? Read on...

The Peugeot is the cheapest and comes well equipped, but it offers 136bhp compared with between 170 and 180bhp for the others.

The Audi and BMW are in entry-level trim while the Renault comes loaded with kit – leather, cruise control, 18-inch alloys and Bluetooth.

The Audi will cost the same taxpayer £175 a month, while the Renault lags well behind and will cost £201 a month in BIK tax.

With 18-inch alloy wheels, the Renault will have the most expensive tyre costs (the other three run on 17-inch wheels), and its fixed 18,000-mile service intervals are the shortest of the group.

The 407 will need attention every 20,000 miles while the Audi and BMW come with variable servicing intervals.

The highest fuel and SMR costs, plus the worst depreciation, confine the Laguna to last place – it seems Renault’s positioning of the car and the guides’ RV predictions are not in the same area.

The Audi will be the cheapest to run, and is the only car to drop below the 40ppm barrier.

Choosing a coupé involves far more emotion than the selection process for a saloon or hatchback, and as such the Laguna makes a strong emotive case for itself. It looks right, is well equipped and drives very well.

Unfortunately, a degree of cold, hard logic needs to enter the equation, and the fact that the Laguna is the most expensive to run and costs a driver the most in BIK tax confines it to last place.

The Peugeot is also discounted – its styling lacks cohesion and it cannot compete on power and driving terms with the rivals here. So, predictably enough, the winner will be German and it is the Audi’s running costs advantage which seals victory from the BMW.