RENAULT is a bit of an old hand in the mini-MPV market, having offered Scenic models in fleet for 10 years.

Of course, it’s been fettled a little since 1996, most recently in 2003 when the Scenic II was unveiled, as well as the Grand Scenic – a long wheelbase version with an extra row of seats.

Now both Scenic and Grand Scenic are back with a fresh look, a new engine and two new gearboxes, and are joined by a Grand Scenic with just five seats.

Renault says there is a demand from customers for such a long wheelbase Scenic, which replaces the two extra rear seats with more boot room, taking capacity to 1,960 litres – an increase of 120 litres over the standard model.

The exterior design is a visible evolution of the last model, but has been updated with a new grille, redesigned front and rear bumpers and new headlights. The rear light clusters are also new, and look very modern with their LED bulbs.

The range is available in four familiar trim levels – Authentique, Expression, Dynamique and Privilege. The changes to each trim level from the previous Scenic reflect the changes made on the new Megane.

So, the base-level Authentique now has body-coloured door mirrors and door handles, and there are chrome detail strips on Dynamique interiors. 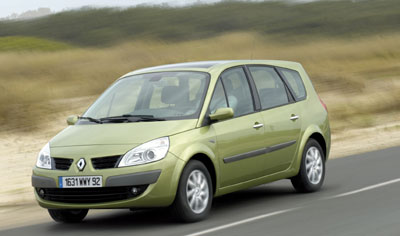 The soft-touch dashboard materials seen on the latest Laguna and Clio make their way on to the Scenic for the first time, and extra soundproofing in the cabin, engine and drivetrain is claimed to make a quieter ride.

Aesthetic revisions aside, the biggest change in the new line-up of Scenics is the arrival of the 2.0-litre dCi turbodiesel with 150bhp. It will take the five-seat Grand Scenic to 62mph from standing in 9.7 seconds and can be mated to a six-speed automatic transmission.

This, together with a four-speed automatic ’box available for the 1.9 dCi with 130bhp, gives Scenic its first diesel automatic options.

Renault expects fleets to account for around 70% of sales of the new Scenic range, which will reach 30,000 units in 2007. The majority of fleet sales will be to user-choosers looking for an alternative to an estate car.

And there is plenty of choice throughout the range. As well as standard and long wheelbase versions, buyers have the choice of seven engines – four diesel and three petrol – ranging from the ultra-economical 1.5 dCi with 86bhp to the 2.0-litre petrol and diesels with 136bhp and 150bhp respectively.

BEFORE heading out on the road, I had a good look around both the five and seven-seat Grand Scenics.

Fit and finish is good and Renault’s pledge to improve quality seems to be proving true, but I’m puzzled by the need for a five-seat Grand Scenic. Granted, there’s more luggage room but most of that is contained in compartments under the floor where the seats fold down in the seven-seater. 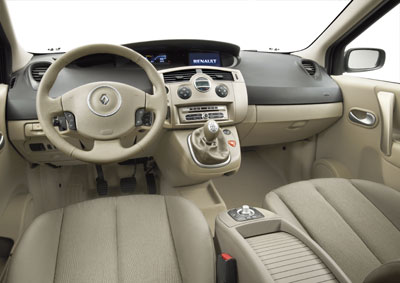 Because they fold down, the latter car can take a considerable amount of luggage, but with the option of the extra seats if needed.

As the premium for the seven-seat car is only £250, it seems worth paying to have that option. It may also make more sense on the used market, as buyers will assume that a Grand Scenic is a seven-seater and this could affect residual values.

Get into the driver’s seat of the 2.0 dCi Grand Scenic and things improve. The engine, developed with Nissan, is excellent – smooth and with plenty of torque.

The ride is floaty, as you would expect from a car such as this – driving enjoyment will always play second fiddle to comfort and practicality, and in this respect the revised Scenic range scores highly.

THE Scenic update is generally a successful one, and the new 150bhp diesel engine and automatic gearbox combination is a cracker. The Scenic has long been in the vanguard of mini-MPVs, and although it looks little changed, there are enough improvements to ensure it continues to sell well.