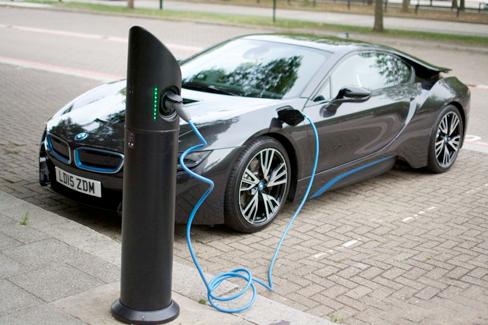 High-performance cars have gradually been removing themselves from contention as an acceptable company car for directors or company chiefs.

CO2-based company car taxation, rising fuel costs and the recession of 2008, which forced many businesses to pare back costs, have all played their part in making flashy cars funded by the company seem an unnecessary and inappropriate expense.

However, with recent advances in technology it’s reasonable to assume there are choices out there that could fit the bill for a cautious company, and perhaps be less costly to run than expected.

BMW would suggest its i8, the second member of its ‘i’ plug-in car family, and one that has brought the most radical change to powertrains in performance cars.

Using lightweight carbon fibre construction, which helps keep weight down, the i8 has a small, but powerful, petrol engine, in conjunction with a potent electric motor.

The 231hp 1.5-litre three-cylinder engine has two turbos to ensure it punches well above its weight. It is mid-mounted and drives the rear wheels, while a 170hp electric motor sits forward of the cabin and drives the front wheels.

Combined, these can deliver 362hp, giving the i8 the kind of performance (and pricing) offered by rivals such as the Mercedes-Benz AMG GT, Porsche 911 and Aston Martin Vantage.

The i8’s interior feels hi-tech, and there’s room in the rear for a couple of children – or extra space for luggage.

It takes 4.4 seconds to reach 62mph from rest, has a top speed limited to 155mph and, perhaps crucially, has CO2 emissions of 49g/km.

Most of the time, the i8 can be driven on electric power alone, until its plug-in charge is depleted – usually good for around 15-20 miles, although officially 23 – but the engine can be woken up by more deliberate use of the accelerator pedal, or by engaging sport mode. The latter will also recharge the battery while driving.

And despite being powered by a three-cylinder engine, which would usually sound off-balance and unrefined, BMW has succeeded in giving it a sound more befitting a high-performance car. It wails like the best six-cylinder engines under hard acceleration, and the extra boost of the electric motor’s instantaneous maximum torque is welcome.

The i8 is well balanced and responsive on the road, although perhaps feeling a bit less emotive and more clinical than conventionally-powered rivals.

Although it’s a £100,000 car, the significant benefits listed in our cost comparison and a discount on the London congestion charge make it a worthwhile choice as a business purchase.

In that respect, the i8 is a unique supercar proposition.