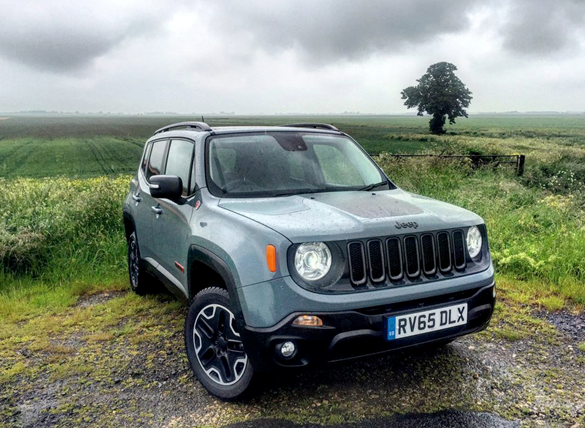 The name Jeep conjures up visions of tackling the great outdoors by car – almost limitless ability over all kinds of terrain.

The first Jeep went into production 75 years ago, and it was one of the original Willys Jeeps that inspired the first Land Rover. Since then the off-roader has enjoyed a place in car markets across the world, with a number of manufacturers creating their own versions.

In the last 20 years, we’ve seen growth in ‘soft roaders’ and ‘crossovers’ – cars with the appearance, style and practicality of SUVs, but with limited off-road ability. These have perhaps successfully retained the position of SUVs among user choosers in the wake of ever-tightening demands on CO2 reduction.

Jeep has those models in the two-wheel drive versions of the Cherokee and the compact Renegade. But, of course, with all that 4x4 heritage there are still versions that perform like a true Jeep.

The Renegade shares its platform with the Fiat 500X, and in many four-wheel drive versions, there’d be little to choose between the capability of the Fiat and the Jeep.

But there’s a version that should do all the things a more authentic off-roader will do, called the Trailhawk.

When the Renegade was introduced in 2015, this version came with only a 170hp 2.4-litre petrol engine, but now it’s offered with a more frugal 170hp 2.0-litre diesel.

The Trailhawk's ground clearance is raised by 30mm over the standard Renegade, and, as well as on-demand 4WD, there is a selectable low-range function, while the car comes with the ZF nine-speed automatic gearbox as standard, as well as all-terrain tyres.

So perhaps in the same way that you can see a likeness between a kestrel and an eagle, the Trailhawk has the abilities of a large Jeep distilled into a compact package.

There isn’t too much of a price to pay in its on-road behaviour, with little cause for concern when cornering, despite the relatively high centre of gravity.

The engine and transmission work well together, while the Trailhawk specification is very well-equipped, with leather, heated front seats and nav. Our test car had the optional visibility pack (£750) which has xenon headlamps, auto-dimming rear view mirror, automatic dipping headlights, plus auto headlight and wiper activation.

While there is a price to pay on CO2 emissions and fuel consumption compared to other models (though emissions are by no means prohibitively high), for fleets with a more flexible policy for user choosers there would also be kudos in driving probably the most capable off-roader of its size.