ONE of the criticisms levelled at the Rover 75 since its launch is that its unashamed retro styling and deliberately antiquated interior materials unnecessarily hark back to Rovers of the 1950s.

BMW must have believed the best strategy for launching a new Rover was to recapture the glory days of the P5 and P6, although with a car that was modern in size, construction and execution.

There must have been people at Rover who thought differently and, following the separation from BMW, the first Rover concept car revealed in Geneva was a modern-looking estate car.

The entire Rover range, led by the 75 in February, has had a thorough makeover. The 75 has had essentially the same line-up and appearance as in 1998 when it was launched.

The thirsty 2.0-litre V6 was dropped in favour of the more frugal and responsive 1.8T a couple of years ago and the lower-power diesel is almost never mentioned. The appearance of the 75 has been refreshed, with more modern headlamp units and grille. Inside, darker instruments with a modern typeface have replaced the ivory-coloured dials. Not that the original 75’s instruments had Roman numerals indicating speed and rpm, but you feel there has been a conscious effort to modernise things where possible.

The intermediate model grade, Club, which sounded stuffy, has been dropped, but Classic and Connoisseur have been retained.

The new trim level, Contemporary, is roughly the same price as Connoisseur but with a different emphasis so now the grading reflects what the premium manufacturers offer, such as Mercedes-Benz’s Classic, Elegance and Avantgarde.

However, you can’t just label a car Contemporary and pretend it’s an Audi A4. Giving a car a name with certain connotations doesn’t immediately bestow it with those atributes. Do you remember the Mitsubishi Carisma?

Inside, the walnut dashboard of the Classic has been replaced by dark grey wood – similar to Sport models in the Jaguar range – the seats are different from those in the Classic and Connoisseur models and are seemingly lifted from the MG ZT models. Outside, there is less chrome trim than on the other models and a few other features to distinguish it from the rest of the range.

Our test car was the 129bhp diesel, which uses an upgraded version of the original BMW-sourced common rail diesel, but while most rivals achieve Euro IV compliance, this Euro III unit could have a financial impact on drivers.

However, maximum torque of 221lb-ft comes in at 1,900rpm and maximum power is achieved at a remarkably low 3,500rpm. It means the Rover 75 provides its performance with the hushed tones that accompany such low revs. 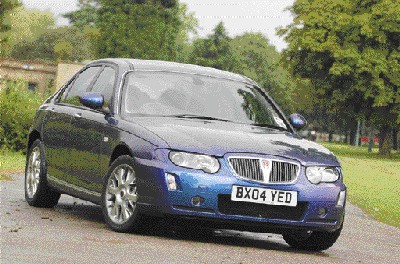 A sports handling pack is available as an option to introduce sharper reactions because as standard there is still a bias towards comfort – surely if people want that sort of thing they will choose and MG ZT.

It means there is more body roll than in something like a Peugeot 407 and duller reactions from the steering, but it will be quite acceptable for most drivers.