ANY thought that our replacement Saab 9-3 (our original car was severely mauled by a lorry at a roundabout a last month) might be in for a gentle introduction to the household was soon dispelled.

Within two hours of getting my hands on the Sport-Wagon’s chunky black key the Saab was flying north on the first leg of a 700-mile round trip with flanks and rear end increasingly encrusted in an ever-thickening layer of road salt. It’s just as well I had a couple of minutes to admire the Saab’s still-clean lines – and its delectable derriere – prior to my departure.

Where the saloon’s rear end is quite mainstream – but better looking than say, that of a BMW 3-series – visually the SportWagon’s is in a class of its own.

Saab’s bold move to go virtually unchanged from what was first seen in 2004 as the 9-3 Sport-Hatch Concept and make it into production might have alienated the odd Saab-isti of old.

So what, I love it. Those vertically stacked ‘ice white’ rear lights are gorgeous; their form and structure transcend their primary function to become works of art. And set against the steel grey paint they are at their best.

This time last year my long-term test car was our SportWagon’s sister car, the saloon with an identical 1.9 TiD 150 engine.

At the time I praised the Euro-IV compliant direct injection Fiat-sourced General Motors engine for its strong performance from as little as 1,200rpm showing on the tachometer all the way around to the far end of the dial. And the same goes for our Sport- Wagon, but I don’t recall the narrow band of annoying noise present in this car which arrives at precisely 2,000rpm – coinciding with my steady motorway cruising speed – and disappears soon after. 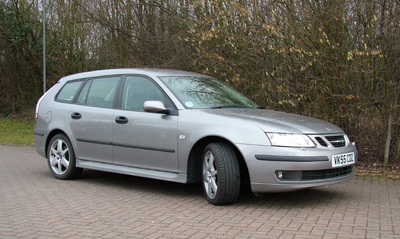 At higher motorway speeds, the 9-3’s clean aerodynamics really come into play as the car hunkers down onto the Tarmac. Fast, sweeping bends can be taken with confidence. Slower, tighter bends well illustrate the 9-3’s immediate steering response that is, in no small part, enhanced by Saab’s ‘Reaxs’ multi-link rear suspension that allows a small amount of rear axle steering.

Our replacement 9-3 differs from our original Fusion Blue test car in quite a few areas of specification.

The optional five-spoke ‘Twin’ alloy wheels have given way to the standard fit five-spoke ‘Evo’ alloys and the black roof bars have gone (looks better and lower without them), as has the £1,660 Saab Infotainment system upgrade that included satellite navigation with a colour screen and a more upmarket radio tuner/CD.

Thankfully, we keep the powerful Xenon headlight upgrade with power-washers.

After my first five frantic days and 830 miles with the Saab, I’d expected a caning at the fuel pumps. Well, you could have knocked me down with a feather. The sprint north actually bettered Saab’s official combined 46.3mpg by a cat’s whisker with 46.5mpg, and since my return the Saab has still averaged a wallet-friendly 44.7mpg.