OVER the last few weeks, the Saab has been showing off its contradictory, and complementary, talents.

I’ve done seriously high mileages in it, chugging from the far south-west of England to north Wales and seemingly most places in between.

It’s a relaxed high mileage cruiser that manages well over 40mpg and has good range, making it ideal for the job. Just stick it in sixth gear, with the revs barely ticking over, and off you go. That’s the beauty of a long-legged diesel.

And then, on less workmanlike journeys, you can drop the roof and cruise along in the sunshine. It’s a really elegant car with the roof stowed, and we’ve got the colour-coded door surrounds and tonneau cover which tidy up its roof-down lines.

So it’s a car that can do two jobs: miner to model at the push of a button.

In terms of tax, it’s a good proposition for a company car driver. As it only emits 169g/km of CO2, it would cost a 40% benefit-in-kind taxpayer just over £200 a month. A similarly-priced petrol-engined 2.0t Vector would cost the same employee about £250, thanks to emissions of 205g/km.

When you also consider the fuel economy of the diesel is more than 10mpg better overall than the petrol, it’s easy to see why Saab is doing such good corporate business with this car. 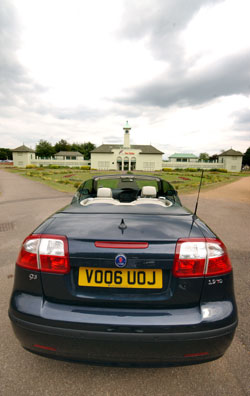 The 9-3 also is one of the increasing number of cars that comes with an iPod adapter socket, which means that you can take every song you have ever owned wherever you go. Once you’ve experienced this, it makes it hard to go back to old-fashioned technology like CDs.

But while the 9-3 is cutting edge in its provision of music, it’s pretty obvious the satellite navigation system is an older version than some car manufacturers are now using.

Inputting a destination takes an inordinately long amount of time. After keying in the first letter, there is a long wait while the computer flicks through every page of variables to give you the next letter options.

And so on, and so on. I’d suggest that if you are going to a particularly long-named place, you give yourself a few minutes before you start off to program it in, or you may not have finished by the time you get there.

It also has the odd foible that can make sat-nav so infuriating. The other day I was following the voice guidance along a dual carriageway and it kept taking me off at every junction, down the slip road, across the roundabout under the road and back up the other side.

Why? Is it scared of heights?