I GUESS I picked the wrong time to join the editorial team at Fleet News.

My first day in the job was at the end of October, just as the long, hot summer was coming to an end. This also coincided with me being handed the keys to our Saab 9-3 Convertible.

Brilliant, I thought, some lucky so-and-so has been cruising around with the roof down for the past couple of months, and now that the weather is turning I won’t be able to do the same thing.

As it turned out, I had a few days to enjoy driving with the top down, but even with the roof up it didn’t detract from the appeal of this car.

It could have been its stylish looks, its classy interior, the way in which it effortlessly ate up the miles or the punchy and frugal engine, but I think it was the way everything combined together to form such a convincing all-round package.

The icing on the cake would have been some summer roof-down motoring, but without this the Saab did more than enough to prove it is a fleet car for all seasons.

I found it difficult to get used to the myriad of buttons on the slabby dashboard, but all 9-3s now come with a much simplified and improved fascia.

And they still come with the night panel feature. It’s a simple idea, and one which really helped prevent my eyes from feeling tired. Press a button and instead of being dazzled by the glare of the entertainment and satellite navigation screen, the vast majority of lights on the dashboard were either switched off or dimmed – leaving just the essential items illuminated.

That, coupled with the Saab’s lack of road and wind noise, reminded me of the helicopter in the 1980s TV show Blue Thunder when it engaged ‘whisper mode’.

In fact, the main reminder that I was driving a convertible and not a saloon came from the sound of rain on the fabric roof – think of being in a tent in a light shower and you’re not far away.

The other reminder was the small boot – which could get even tinier as it had to stow the roof when it was lowered. 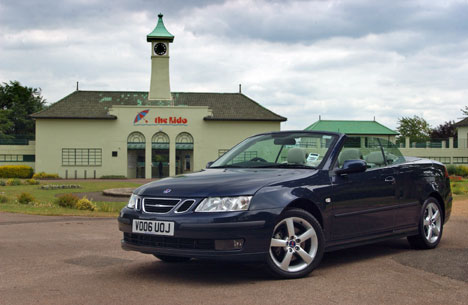 This relegated the Saab to a virtual bystander during a house move as the car was unable to carry large or long loads. It comes with the territory of being a convertible, of course, and anyway, it was far too stylish to get its hands dirty like that.

The cream interior also stood up well, something we were concerned about when the car arrived. After six months and 10,000 miles it still looked fresh – a good omen for fleet managers worried about the effect of a tarnished interior at selling time.