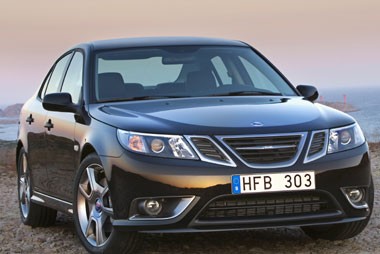 However, some times exceptions are necessary.

Just 500 Saab Turbo Xs will make it to UK shores, but they represent the first chance to take a look at the four-wheel drive (XWD) technology that will become more widespread in Saabs from the end of 2008.

The Turbo X is, if you like, the ultimate incarnation of the current 9-3.

Take a standard 9-3, paint it in a swanky metallic black, add some very shiny wheels and include the new and very clever four-wheel-drive gizmos, and you have a mean looking bit of kit.

The cabin continues the black theme, with black leather swathing the chunky sports seats and carbon-fibre effect plastic dotted around the dashboard. It’s essentially a revised version of the same Saab interior we’ve seen for the past five years.

But it’s what the engine is connected to that is really interesting.

There are several pseudo-four-wheel-drive systems on the market that use predominantly front wheel-drive, only engaging the back wheels when the fronts start to slip.

But the XWD system uses clever electronic trickery to anticipate slippage before it happens.

The ESP and ABS sensors measure data such as wheel speed, yaw rate and steering angle, which is all processed by the central computer.

The little box of tricks then sends the appropriate amount of torque to the back wheels when it thinks the front wheels are about to struggle on their own, in an effort to counteract oversteer and understeer.

But it doesn’t just control the torque delivery to the back axles.

It can send power to each individual wheel – the ones that have the most grip.

The upshot of all these high-tech shenanigans is that the Turbo X becomes a great deal more agile than a standard 9-3.

And the increased stability doesn’t impact on fuel economy in the way that a standard four-wheel-drive system would, as it’s only used when necessary.

To demonstrate the system, Saab organised a little test.

They asked us to drive at a slalom course of cones at 25mph in second gear, and just before we turned to avoid the first one, to floor the accelerator.

But eventually I bit the bullet, and did as instructed. And it worked.

It was very impressive indeed.