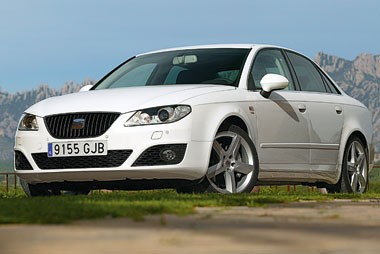 The Exeo is a premium car in all but name, and Seat hopes that user-choosers will recognise the benefits of driving what is, in effect, an old shape Audi A4.

The Exeo, which goes on sale in the UK on April 2, is Seat’s first entry into the upper-medium market.

Both models take the previous generation A4 as their base, with re-worked front and rear styling to make them more on-brand for Seat.

Inside, the dashboard and all controls are lifted from the A4 Cabriolet.

The previous A4 was recognised as having one of the best built interiors in its sector, so this is no bad thing.

As befits what is a ‘toe in the water’ exercise, Seat is being cautious with volume predictions, estimating it will sell 1,500 units by the end of this year, and 2,000 in 2010 when the full range will be on offer.

The possibilities for further new additions are wide, with Seat operating what is, in effect, a ‘pick-and-mix’ policy from the previous A4 offering.

Obviously market forces will dictate what, if any, comes first but your money would be fairly safe with a bet on the Ecomotive arriving first to join low emission versions of the Ibiza supermini, lower-medium Leon and Alhambra people carrier.

The vast majority of Exeo customers (around 75%) will be fleets, and in particular user-choosers.

Seat’s national business manager Toby Winyard said: “Exeo will significantly raise our brand awareness among fleet and business customers and, for the first time, allow us to offer an attractive one-make fleet offering.

“The high level of standard equipment across the range presents obvious benefits to cost-conscious buyers.”

Fleets operating 25 vehicles or fewer will be a key target, with Seat investing in a bespoke data programme that has been developed to provide pre-validated prospects.

Seat UK Exeo product manager James Buckell said: “Rather than purchasing existing off-the-shelf customer databases, we have identified sub-25 fleet customers who are in the market to buy now (or within the next six months) and that match further specific criteria predetermined by Seat UK

"This is an on-going process that will continue to provide significant sales opportunities for our dealer network.”

At launch the Exeo will be offered with two Volkswagen Group common rail 2.0-litre turbodiesels offering 141bhp and 168bhp, and a turbocharged 2.0-litre petrol unit from the Volkswagen Golf GTI delivering 197bhp.

S, SE, Sport and SE Lux trim levels will be available, with the 2.0 TDI 140 Sport expected to be the big seller.

Customers delving into the options list will find features not usually found on a car of this class, such as double-glazed rear windows (claimed to be able to withstand a 30-second hammer attack by a criminal), a solar sunroof which generates energy to power the car’s systems, a chilled glovebox and satellite
navigation.

Petrol and diesel versions of the Exeo come with a high standard of finish and even the base-spec S has a good level of refinement.

All three engine options offer plenty of power, and the diesels in particular are smooth and refined with much less noise intrusion into the cabin than with the old non-common rail units.

They drive well, too, although the size of the wheels fitted makes a noteable difference to the ride.

The S absorbs bumps well on its 16-inch wheels compared to the SE, which has 17-inch alloys and rode over undulations instead of through them.

The Sport and SE Lux on 18-inch wheels give a much firmer ride, which could become tiresome on rougher roads.

Boot space is good but would benefit from being deeper, while rear legroom is compromised with the front seats set right back.

If drivers can overcome the ‘stigma’ of driving a rebadged old Audi, there is much to recommend in the Exeo.