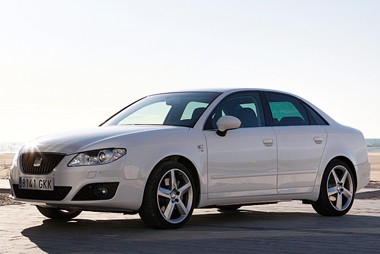 If your first thought when looking at the Seat Exeo is that it resembles the Audi A4, you would not be far from the truth.

The car, pronounced “Ex-ay-o”, has the same floor pan and dashboard as the previous A4 plus a similar smooth shape.

It represents Seat’s first entry into the upper-medium saloon segment with four variants due to be launched in the UK from April 2.

All will have two-litre engines. Two diesels are available with a choice of 141bhp and 168bhp, plus a 198bhp petrol turbo.
Seat plans to target fleet and business customers.

Options for the SE include a fold-out bag in the centre of the rear seats for storing skis, winter pack which heats the front seats, headlight washer system and front washer nozzles. An iPod connection replaces the USB port.

An option on the SE, Sport and SE Lux models is a small coolbox in the glove compartment, along with a solar sunroof which generates electricity to power the car’s ventilation system.

Other extras are double glazed windows (SE model only) that can withstand a 30-second hammer attack, DVD-based sat-nav and SD card slots for MP3 playback.

Seat has asked each of its dealers to nominate an “Exeo champion” who will attend a two-day course at one of
various locations around the country.

Buckell said: “Seat is supporting dealers in the launch of Exeo by investing in a bespoke data programme that has been developed to provide pre-validated prospects.

Rather than purchasing existing off-the-shelf customer databases, we have identified sub-25 fleet customers who are in the market to buy now (or within the next six months) and that match further specific criteria predetermined by Seat UK.

This is an on-going process that will continue to provide significant sales opportunities for our dealer network.”

A similar idea has been introduced for retail customers and is expected to provide about eight leads per dealer at launch.
An ST version of the Exeo is due to be launched in September.

Seat also plans to launch a new Ibiza Cupra and Leon this year among other models.

Petrol and diesel versions of the Exeo come with a high standard of finish and even the base-spec S has a good level of refinement.

They were powerful and drove well although the size of the wheels made a notable difference to the ride. The S absorbed bumps well on its 16” wheels compared to the SE, which had 17” alloys and appeared to ride over undulations instead of through them.

The Sport and SE Lux on 18” wheels gave a much firmer ride, as you would expect, which could become tiresome on rougher roads.

For buyers who specify the SE Lux or Sport, which come with 18” wheels as standard, it may be worth downgrading to 16” wheels for a slightly more comfortable ride.

Boot space is good but would benefit from being deeper, while rear legroom is compromised with the front seats right back.