THE new SEAT Leon should be a cracker – a combination of German engineering and Spanish flair, of ice cool technology and piping hot driver engagement.

But it’s not. The Leon, for all its sheetmetal sexiness, is warm at best, tepid at worst. Which is disappointing because SEAT is, after all, lumped in with supercar firm Lamborghini as a sporty brand in the Volkswagen Group masterplan.

So what’s the problem? Well, for all SEAT’s talk of athleticism, style and auto emoción, the Leon underwhelms in too many key areas to really have a decent chance of stepping out from under the Golf’s shadow.

The Leon is a Golf in a neglige, but unfortunately the cut is neither low enough nor the material sheer enough as we would have hoped for.

The Leon is a handsome car, chunkier than the Altea and far more coherent and sophisticated than the fat-bottomed Toledo. But SEAT’s chief designer Walter de’Silva seems to be resting on his laurels. Surely there must be more to his repertoire than the bold central grille and hidden rear door handles that he first showed on the Alfa 156?

The cabin is a disappointing mix of not enough good and too much bad.

The good first. The driving position is spot on – the low-slung seat enhanced by the combination of high-shouldered doors and narrow windows. The front seats are grippy and snug, and the driver controls are intelligently configured.

The thick-rimmed steering wheel and stubby gearlever are tactile delights, and equipment levels are expected to be high – higher at least than the equivalent Golf – with air-conditioning, central-locking, CD player, electric windows and mirrors, traction and stability controls, six airbags and ABS brakes as standard. Move up the range and you’ll get dual zone climate control, automatic wipers and lights, a top drawer sound system, 17-inch alloy wheels and electric leather seats.

The rear seats don’t do anything particularly exciting – the 60/40 split back drops forward and that’s it. That said, there’s plenty of space in the rear – a six-foot driver can easily sit behind himself. And high lip aside, the 341-litre boot is spacious.

And now the bad. The dash layout is an unappealing mixture of asymmetric lines, hard plastics and uninspiring design. There are more than six different kinds of plastics and materials competing for attention, and they make the cabin look and feel scrappy.

The slabby and contrived centre console is faced with truly nasty grey plastic, fit and finish is ho-hum, the display for the climate and stereo system looks like it was lifted from a 20 year-old calculator and the glovebox is miniscule.

When the Leon arrives in the UK in September there will be a choice of four Euro IV-compliant engines – two petrol and a pair of turbo-diesels – with an anticipated price range of £12,500 to £17,500.

The petrol line-up will kick off with the 100bhp 1.6-litre, followed by the 148bhp 2.0-litre FSI unit. The range will be topped by a 185bhp turbocharged 2.0-litre FSI unit at the end of the year, a powerplant unique to the SEAT family. It will be the feistiest Leon until the brawny 200bhp FR and 240bhp Cupra R models arrive next year.

The diesels are the now-familiar 103bhp 1.9-litre and 138bhp 2.0-litre units. The smaller units get five-speed manual transmissions, while the more powerful ones use either six-speed manual or DSG double clutch gearboxes.

SEAT expects to sell around 10,000 Leons in its first full 12 months on sale, which is similar to what the current line-up achieves. Sales will climb further as the popular performance-oriented models bolster the range.

The fleet sector should initially account for around 45% of total sales. Their fine combination of economy, performance and refinement will mean the diesels will understandably be the key fleet sellers, taking an anticipated 55% of total fleet sales – a 10% climb over the outgoing model.

As a cheaper and better-equipped alternative to a Golf, it will be an attractive proposition for many user-choosers. But the Golf will hang on to its residuals with greater tenacity, it still has that all-important car park kudos that the Leon cannot match and Volkswagen has a wider service network. 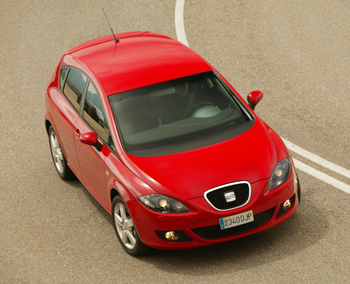 We can’t help feeling SEAT has missed a trick with the Leon. Instead of producing yet another five-door hatch which, styling aside, seems little different from the Altea and Toledo, it seems a pity the Leon isn’t a far more aggressive and radical three-door-only hatch with some real teeth to its bite – the car SEAT hinted at with its Salsa concept car in 2000. As it stands, the Leon is good, but could have been much better.

WE drove three cars at launch, starting with the base 1.6-litre petrol. With a modest 100bhp and a 1,320kg kerb weight performance is leisurely. Short gearing hides some of the engine’s breathlessness, but what the engine lacks in outright punch, it more than makes up for with peppy throttle response, a willingness to rev crisply to its 5,600rpm power peak, and an engagingly raspy exhaust note.

The five-speed manual gearbox delivers a short and precise throw and the steering, although short on feedback, is light and direct. Sitting on 15-inch wheels, the Leon rides with a well-damped composure, the front strut and multi-link rear suspension smoothing out most intrusions.

The 182bhp turbo petrol is a deceptively quick bit of kit, with a hefty dollop of mid-range punch. But too often that deep spread of torque overwhelms the front tyres – on our damp test roads they were always scrabbling for grip. And the bigger 17-inch wheels mean the ride is on the wrong side of pattery and fidgety.

The top 138bhp turbo-diesel is a fine engine, smooth, quiet and full of mid-range zest. And with long gearing – at 70mph, it is ticking over around 2,000rpm – economy is excellent. Avoid the cheaper 1.9 TDI. The ageing unit is wheezy and lacks the bigger engine’s killer mid-range punch.

DRIVE the Leon for no more than a mile and there’s an immediate and powerful sense of déjà vu. It rides and handles just like a Golf or Skoda Octavia. Remember the blindfolded Coke versus Pepsi test? If you did the same test between a Golf and Leon, there will be a lot of head scratching going on.

Not that there’s anything wrong with the Golf’s dynamics – it’s now sharp and honed with plenty of driver engagement. But the Leon should add more. Bluntly put, it relies too heavily on its looks rather than its dynamics to differentiate it from other cars in the Volkswagen group. It’s an opportunity missed by a country mile. 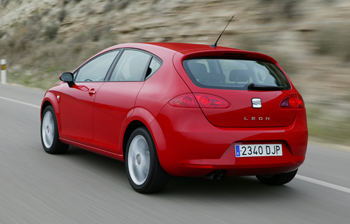