Over the years, there has been some pretty unedifying stuff created by the addition of some plastic: the Rover 25 Streetwise, Citroën C3 XTR and Cher are three that spring to mind.

But there is a market for cars that have been beefed up to appear ready for a more rugged life. The Audi Allroad and Volvo XC70 are two such creations and both have sold very well. 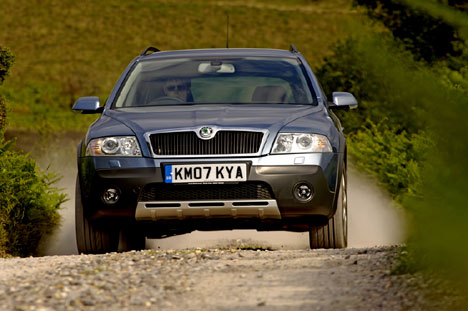 For a driver who wants, or needs, a certain amount of off-road ability, but not the full-on capacity of a 4x4, there’s actually not a lot of choice below those two premium products, and most will end up with the farmers’ favourites – Subaru’s petrol-only Forester and Legacy Outback.

So the new Skoda Octavia Scout begins to look like a smart piece of product positioning.

To bolster its off-road abilities, the Scout also has hill-hold control and automatic brake drying (if the windscreen wipers are on, the pads will intermittently brush the discs to keep them dry and ready for action).

The four-wheel drive system in the Scout operates in two-wheel drive at the front, but will switch to rear wheel drive as well when needed.

Electronic sensors detect slippage of more than 10 degrees and apportions drive to the wheels with grip.

Engines are the two dependable 2.0-litres: 150bhp petrol FSI and 140bhp diesel TDI. Both have six-speed manual gearboxes as standard.

The Scout is a stout beast, with its square stance, chunky alloys and stylishly integrated bumpers.

The interior is mostly standard-fare Octavia – certainly no bad thing – with some Scout scuffplates and a passenger grab handle on the dash should the going get rough.

Everything feels superbly screwed together and of high quality, and there’s lots of space.

The diesel engine we drove was typically smooth and unfussed, and is the better choice for this type of vehicle as the extra torque could be useful in off-road conditions.

The off-road test route was hardly at the uncivilised end of the world, but the Scout managed the gravel tracks and one steep rocky downhill situation with ease.

It’s fair to say it will contend with the levels of off-road conditions that most owners might envisage for it.

The Scout is a very useful niche vehicle. It is stylish, well-built and does exactly what it purports to do. Fleets needing some off-road capability should have a look.