THE collective noun for Skoda drivers should share that of lions – a pride.

Award-winning levels of customer satisfaction probably owe something to a particularly fierce version of brand loyalty.

After all, it’s a confident and knowledgeable sort of driver who can cast aside those old Skoda jokes and ‘come out’ as a confirmed fan in the face of some archaic but still deep-seated badge snobbery out there.

The Skoda Octavia, never out of the top-five ranking of the JD Power UK drivers’ survey of customer satisfaction, is a case in point.

It is a worthy testament to Skoda and the Octavia and probably makes our long-term Classic specification 1.6 FSI a fleet manager’s dream. Add in a cost price of just £11,990 (£12,305 with the optional diamond silver metallic paint of our test car) and low running costs (fuel economy is around 40mpg) and you wonder why fleets bother to consider anything else. 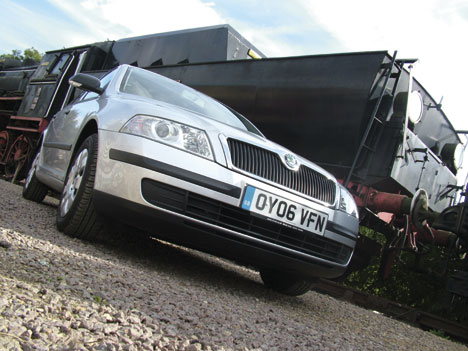 Martin Burke, head of business sales at Skoda Auto UK, told us when we took it on that the Octavia offered an ‘extra bit of car – a lower-medium sector car at supermini prices’ and people in the know, as opposed to badge snobs stuck in a last-century time warp, would probably agree. Our testers certainly seem to, despite a somewhat slighting reference to dullness. The Octavia may not look very exciting but it shares much with the Audi A3, SEAT Leon and Volkswagen Golf, including the lean-burning direct-injection FSI 115bhp engine.

The Octavia is actually a hatchback, though I think it’s elongated enough to look like a saloonish hybrid and as such can capture two market preferences in one vehicle.

We felt the Classic represented very good value indeed. It is solidly-built and well-equipped for the price.

Passenger space is excellent and there’s a sector-leading giant 560-litre boot. That probably makes it ideal for use as family transport and what it lacks in excitement it makes up for in practicality.

Fully-loaded, it can feel a bit lacking in power, particularly uphill, though discovering the recommendation for the use of super unleaded fuel did help a little after an early fill-up with regular (thanks for the advice on our letters page about reading the handbook first!).