I’M sure you’ve worked with somebody who had an uncanny knack of hearing a colleague’s idea and a few days later repeating it in front of their boss as their own cunning plan, perhaps not even realising they didn’t think of it in the first place? 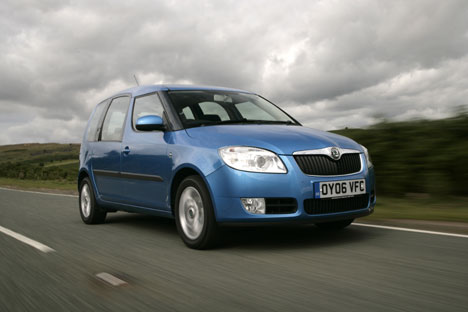 They’re not half as clever as they think they are, and certainly not as original, which is a little bit like the Roomster, a mini-MPV that Skoda variously describes as ground-breaking, bending the rules and even a ‘packaging miracle’.

Quite an advance billing, but after getting acquainted with it, I couldn’t help but get the feeling it’s not doing a lot different to a Citroën Berlingo or Fiat Doblo, except look less like ice cream vans than they do.

That’s not to say the Roomster is a poor car. As the name suggests there is lots of space –much more legroom in the rear passenger seats than you’d get in any hatchback or saloon, while there is up to 1,750 litres of space in the boot, all of which is pretty good for a car that is only 4cms longer than an Octavia (which has just over 1,300), but vastly less than the 2,800 litres you get in the slightly shorter Citroën Berlingo. So good, but no miracle.

What the Roomster does have over the more workmanlike offerings like the Berlingo is significantly more style, and from certain angles the front, thanks to the wraparound front windscreen and slanted side windows, looks rather mean.

Fans of car design that creates the impression of a unified whole won’t find much to love about the Roomster but there’s a reason for its pointy front bulbous back profile.

Skoda claims to have combined a car-like cabin at the front, with car-like ergonomics, called the ‘Driving Room’ while at the back the ‘Living Room’ has flexible seating which can slide back and forth, as well as recline, while the middle seat can be easily lifted out.

In the boot, there’s a handy plastic fence to stop small objects rolling about, and some very useful hooks which pull out of the back of the seats for lashing luggage. In terms of practicality, Skoda has got most bases covered with the Roomster.

When it comes to driving, well don’t expect fireworks. The performance of the 85bhp 1.4-litre is, to put it politely, adequate, but then this car calls for an engine that is just about adequate. It’s not about speed, and as I’ve got fingernails that grow faster, it’s just as well. Instead, the Roomster is cheap to fuel and relatively economical returning about 40mpg.

The handling is decent for such a high-sided vehicle, although the brake pedal has a horribly doughy feel with the first half of its travel doing nothing to slow the car down.

But overall the Roomster does its job of providing useful transport for those that need a more than average amount of space.

It does look rather odd, although better than the likes of the Berlingo or Fiat Doblo which look more suited to carrying cement bags than camping equipment and the interior cabin is nicely designed. But it’s hard to get away from the fact that the Roomster is more space oddity than miracle maker.