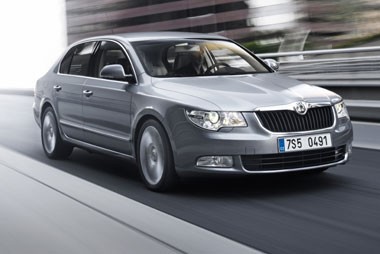 Naming cars is a bit of a dark art.

Most manufacturers either go for a combination of letters and numbers or come up with a completely new word that approximates the image that they want to convey.

Some, however, just seem to raid the dictionary for synonyms of “really good” – witness the Honda Legend, Ford Fantabulous and the Volkswagen Awesome.

Ok, not the last two. Skoda’s Superb is one such vehicle, and I can’t help feeling that this naming style is fraught with danger.

It allows for no mystery in the car’s image – it’s essentially a boast: “This product is great”.

Skoda, by its own admission, has not completely shaken off its rather dubious reputation of old.

It might now be run by Volkswagen and produce some decent cars, but to many the words Skoda and Superb are still oxymorons.

The last generation Superb has been trundling around our streets since 2002.

Based on the Volkswagen Passat, it’s been a favourite of taxi drivers but has made little impression on the wider saloon market.

The new Superb, however, has much loftier ambitions. Skoda wants this car, built on an all-new bespoke platform, to take on the likes of Ford’s Mondeo and Toyota’s Avensis.

This is not a budget alternative, this is a mainstream rival to the established players, designed to continue Skoda’s gradual erosion of unwanted memories.

Skoda UK’s director Robert Hazelwood said the new car doesn’t compare to its predecessor and has more in common with the Octavia, which has found favour in the fleet world.

“The new Superb is a much more robust, competent fleet head-to-head competitor,” he said.

The styling is deliberately conservative, while inside,
designers and engineers have worked hard to create a quality and extremely roomy vehicle.

The most notable features of the new Superb are its class-leading rear legroom and its high-tech boot.

The tailgate, called Twindoor, can open in two different ways.

It can either hinge from the base of the rear window in traditional saloon fashion or, at the press of a button, open from the roof like a hatchback.

However you open it, there is 565 litres of space for stuff in the back, or 1,670 litres with the rear seats folded flat.

Exact UK specification has yet to be decided, but there is plenty of gadgetry to choose from, including a touch-screen navigation unit with 30GB of hard disk space for music, adaptive front lights that change the beam shape depending on the conditions, and automatic parking.

The trim levels will be S, SE and Elegance.

Power will come from three petrol and three diesel engines.

Trying to take on the likes of the Ford Mondeo and Toyota Avensis is no small task, but rest assured that the Superb is a very good car.

The looks could put a lot of people off, however. Skoda calls it traditional and elegant – I call it plain and boring.

It has a hint of square Volkswagen Passat about it, and to my eyes the front and back views don’t tally up with each other at all.

However, that’s my only major complaint about the Superb.

The interior is much more pleasant.

The materials below waist level feel a tiny bit cheap, but it’s well designed and all put together with typical Volkswagen Group expertise.

The legroom in the car is staggering and the boot is massive.

The Twindoor system works really well, although it took me a few goes to get my head around how to work it.

The first engine we tested was the new 1.4 TSI petrol. It’s not particularly quick – 62mph is reached in 10.5 seconds, but it’s smooth and peppy.

The 138bhp 2.0 TDI is again smooth and torquey enough to deal with everyday driving.

The driving experience is best described as comfortable rather than scintillating, but that’s not to say it doesn’t handle.

The steering is nicely weighted, with decent amounts of feel, and the Superb is as happy winding in and out of bends as it is on the motorway.

If you’re not concerned with being the flashiest cat in the alley, or obsessed with badge snobbery, then the Superb is very close to living up to its name.

In the driver’s seat or as a passenger it’s comfortable, roomy and sturdy, like a good pair of slippers.

But better to drive.