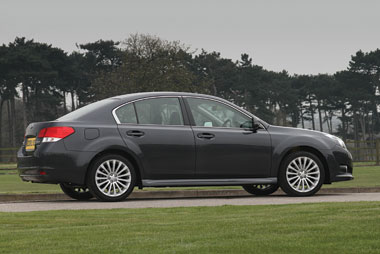 Subaru is not a car manufacturer most fleet operators would expect to have on their choice lists.

With its rallying heritage and all-wheel drive focus, it’s hard to see how such a niche brand could make in-roads into the fleet market.
However, Subaru’s first diesel engine launched in 2008 was well received and competitive, and now it has found a way to ensure its new Legacy saloon appeals to certain fleet customers.

It has achieved CO2 emissions of 156g/km, which brings it within the significant 20% 160g/km first-year writing-down allowance threshold.

Paul Tunnicliffe, Subaru managing director, said: “Subaru is no longer defined by its performance products. There is increased emphasis on other well-established and technological differentiators.

"We are focusing on developments of high-quality, engineering-led lifestyle products such as the Legacy Tourer, Outback and Forester, and future models will continue this theme.”

The Legacy saloon is still unconfirmed for UK sale but Subaru is testing the water with a few contract hire companies, and says it has received positive feedback from pricing guide CAP.

The company has seen all sales improve this year, although fleet sales are still very few.

It witnessed renewed interest from customers during the extended periods of snow this winter thanks to the standard all-wheel drive system fitted to its medium and large cars.

If Subaru goes ahead, the Legacy saloon will be offered only in S equipment grade – the SE comes with larger wheels (18 inches instead of 16) and an aero kit that would take the car’s CO2 emissions above 160g/km.

However, the S is not short of equipment.

Subaru’s diesel engine produces 150bhp and 258lb-ft of torque. In the Legacy Tourer it will reach 62mph from rest in 9.6 seconds, so should be a little brisker as a lighter four-door.

Official fuel consumption on the combined cycle should be in the region of 48mpg given its level of emissions.

The Legacy saloon is a pleasant car to drive with good refinement and engaging road manners.

Subaru’s diesel engine – despite its unique ‘boxer’ configuration with its cylinders horizontally opposed – is up with the best in this class in terms of its noise suppression and lack of vibration transmitted into the cabin.

Maximum pulling power is available from 1800rpm, and while its six-speed manual transmission doesn’t have the slickest of gearchanges, it’s a short shift action.

The Legacy’s boxer engine contributes to a low centre of gravity, so it has great agility on twisty roads, and the four-wheel drive improves traction in tricky conditions.

The Legacy saloon would be a fine addition to the Subaru range in the UK, and could make sense for drivers who want something a little different from mainstream upper-medium saloons.

If there is good feedback from contract hire companies and RV forecasters, it could also stack up well on costs.