IF you are going to be successful in selling lower medium company cars, attracting professionals in their mid-30s is a pretty good start – just ask Audi, Honda or Volkswagen.

And the Auris is the car which Toyota hopes will lower the typical age of its hatchback buyers from 60 by appealing to those 30-something professionals.

It claims the Auris is distinctive and sophisticated while, at the same time, delivering the quality, reliability and innovation Toyota is known for.

And while life as a Fleet News long-termer will shed more light on these claims, it has impressed in its first few weeks.

Unlike the Civic, the Auris doesn’t look anything special from the outside – the front is like a bigger Yaris and the back an updated Corolla. And my 30-something friends haven’t exactly been falling over themselves with excitement at the sight of it – although they all agree it has a certain chunky quality.

But first impressions can be misleading as get into the cabin and things become a lot more interesting.

Apart from the novel bridged centre console, the pièce de résistance is undoubtedly the Optitron instrument panel, which has impressed everyone who has been in the car. Illuminated in a classy amber, the two major dials contain two LCD displays with information such as fuel level, water temperature and fuel consumption.

It’s smart, clear and modern, and the way the backlight gently fades to full brightness when the ignition key is turned sets a classy tone which the rest of the interior matches up to.

While there is nothing particularly innovative inside – its most noticeable features of having the gear lever high and close to the steering wheel and a flat floor in the rear were seen in the last-generation Civic – there is a feeling of innate rightness and simplicity about the interior.

All of the controls from the leather steering wheel to the air-conditioning dials are well-constructed, the seats are comfortable and supportive, and there is a real cavernous feel about the interior space.

The Auris is larger than the car it replaces – it is 4cm longer and taller and 5cm wider – and the luggage area has also increased to 354 litres of space – a 16-litre improvement.

It’s nice to drive, too, although anyone looking for a sporting drive should probably look to rivals like the Ford Focus or Vauxhall Astra.

Comfort seems to be the Auris’ forte and it does this well. The 124bhp 2.0-litre turbodiesel engine, matched to a six-speed gearbox, suits the car as it moves it along in a relaxed manner with ample overtaking urge if the need arises.

Toyota’s claimed combined economy figure is 52.3mpg and the Auris has made a promising start on this front – the first fill-up saw 48.7mpg and as the engine loosens up, I hope to get even closer to the official figure.

Strong residual values strengthen the case for the Auris, with CAP Monitor’s ratings showing the 2.0-litre diesel is expected to retain 40% of its value after three years/60,000 miles – an impressive figure in this sector where mid-20s is not unusual.

Only time will tell whether Toyota has done enough with the Auris to tempt company car drivers away from its sharper-looking rivals, but it is a far better package than the Corolla it replaces.

The new name should help win it new admirers and it is somehow fitting that with the name Auris having its roots in aurum, the Latin word for gold, it has made a 24-carat start to life as one of our long-termers. 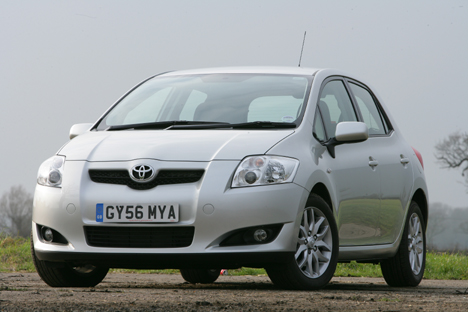 'Following launch feedback we believe we have successfully combined new and fresh visual appeal, best-in-class drive and high levels of specification in the Auris.

'The initial feedback from contract hire companies and industry guides paints a very favourable picture in terms of SMR costs and, in particular, future residual values.

'We are targeting fleet sales of 40% in 2007 from an overall target of 22,000 units with only a small amount of Auris on lease to rental companies.

'Presently we expect this to be around 8% of our overall fleet sales volume.'
Tim Copland, general manager, Toyota Fleet