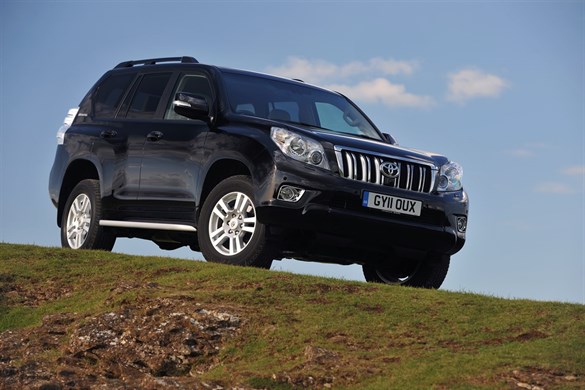 Four-wheel drive vehicles have evolved over the last 10 years or so into the modern SUVs of today, but there is still a role for those whose heritage is as a workhorse.

The Toyota Land Cruiser is one of a handful of large 4x4s what you'd rely on to keep you going in extreme terrain where many SUVs might fall short.

The latest version of the Land Cruiser was new in 2010 and retains many of the attributes that have made it a small but vital component of the fleet market over the years.

It goes up against cars such as the Land Rover Discovery, Mitsubishi Shogun, Nissan Pathfinder and the Jeep Grand Cherokee.

Ability off road, as well as a substantial towing capacity make these cars choices for utility fleets, construction and high visibility organisations such as the Highways Agency.

In these cases, where private use of the vehicle is non-existent, CO2 emissions and fuel consumption while important in as much as they contribute to the overall costs f the vehicle, are not as much of a factor as doing the job properly.

Toyota still offers short- and long-wheelbase versions of the Land Cruiser, although the five-door long-wheelbase model is much preferred on the used market.

So the Land Cruiser comes with a version of the trusty 3.0-litre four-cylinder engine found in the previous version. It produces 190bhp and a useful 302lb-ft of torque, although it can feel cumbersome in some typical on-road situations, such as roundabouts and junctions compared with the more on-road biased 4x4s.

New safety features include cornering lights, which turn with the steering (standard on LC4 and 60th Anniversary variants) and there are many other upmarket features available that make it feel more sophisticated than its utilitarian appearance suggests.

Refinement is improved over earlier versions, comparing favourably with other four-cylinder large 4x4s, although the Discovery's smooth six-cylinder diesel still has an advantage.

But, like the Discovery (and the latest Grand Cherokee), the Land Cruiser can be chosen with a system that manages the off-road systems.

Multi-terrain Select is activated using the multi-information switch on the steering wheel and accessed via the multi-information display. It offers four terrain modes:  Mud and Sand, Loose Rock, Mogul and Rock. The mode selected is shown in the display, with an additional prompt to the driver of the required H4 or L4 four-wheel drive transfer range. The Multi-terrain Monitor automatically displays the view ahead of the vehicle.

The Land Cruiser majors on quality alongside cars like the Mitsubishi Shogun and Nissan Pathfinder, but it isn't cheap. However, fleets could find it slightly less expensive to run than six-cylinder alternatives.