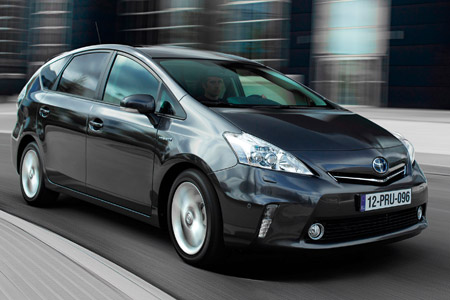 Hybrids have been seen on UK roads for 12 years and Toyota, one of the pioneers, now has five petrol-electric models wearing its badge.

Three of these will draw on the Prius heritage, with the second production model in the third-generation Prius range now on sale.

The Prius+ will look familiar to anyone who has seen the latest Prius, but it is longer, wider and taller.

The growth in dimensions over the standard car has been necessary to accommodate a third row of seats and allowed Toyota to offer the first seven-seat hybrid in the UK.

However, it isn’t a case of grafting a larger body to the standard Prius. Toyota has ditched the nickel-cadmium batteries from under the luggage compartment and used more compact (and more expensive) batteries mounted under the centre console.

It means the Prius+ can offer the seven-seat versatility of other people carriers, such as the Vauxhall Zafira Tourer, Renault Grand Scenic and Ford Grand C-Max.

However, the Prius+ offers CO2 emissions from 96g/km, placing it in the 10% bracket for BIK tax, whereas its most efficient diesel rival – which attracts the 3% supplement on BIK tax – can achieve only 17%.

Both T4 and T Spirit use tyres with lower rolling resistance than those used in the standard Prius to help reduce fuel consumption and emissions.

The technology in the Toyota isn’t cheap, but with prices starting at £26,195 for a T4 variant, the Prius+ is well equipped for the money.

The T Spirit adds larger alloy wheels (that take the car to 101g/km instead of the 96g/km of the T4), Toyota Touch & Go Plus navigation and audio interface, an eight-speaker JBL audio system, leather seats, advanced Bluetooth and traffic information, and voice recognition and text-to-speech function.

According to Toyota’s managing director Jon Williams, the car is for people “who need a bit more Prius” – in other words, those who like the idea of running a hybrid, but who need the extra space of a people carrier.

The company says it has revised the suspension set-up from the Prius to offer improved agility and a more comfortable ride. It has succeeded – ride comfort is improved and there is also a feature built in where the electric motor mitigates against potential jerky progress over undulating surfaces.

The car is biased toward comfort, so body roll in corners is far more significant than on rivals such as the Grand C-Max or Zafira Tourer.

The Prius+ doesn’t feel terribly quick in a straight line either, although pressing hard enough on the accelerator pedal gets both the 1.8-litre petrol engine and electric motor working together, and decent progress can be made.

But that isn’t really the point of choosing a hybrid and, with a great deal of urban use and gentle driving out of town, the Prius+ should get somewhere near the official 68.9mpg of the 96g/km T4 version.

A 70km (45-mile) test route on the launch event – a combination of motorway, A-road and urban – resulted in overall fuel consumption of 64.2mpg and it seems Toyota is getting better at managing the performance of hybrids so the official fuel consumption figures do not seem far-fetched.

Although it is based on the third-generation Prius, it has a number of unique features. The dashboard is new, the rear end takes on a completely different tailgate shape and, with up to 1,750 litres of luggage space with second and third-row seats folded, the Prius+ is actually more spacious than Toyota’s other seven-seat people carrier, the Verso.

The Verso, with its choice of petrol and diesel engines, will continue as it caters for those fleets with diesel-only policies.

Fleets will take the lion’s share of these and, with low CO2 and no diesel BIK supplement helping secure less tax liability and National Insurance Contributions, it’s likely that drivers will be satisfied with what is currently a unique proposition in the market.