THIS can’t be right. Incredulity set in around the office when I read out the price of the Toyota RAV4 T180.

With prices for the standard RAV4 starting at £20,000, we were all set to compare the top-of-the-range model to the likes of the Hyundai Tucson, Honda CR-V and Nissan X-Trail.

After double-checking the price, it was confirmed – Toyota really is going after the big boys, hoping for a stake in the lucrative premium compact SUV sector.

The T180 is its big hope. Powered by a 2.2-litre diesel engine which develops 295lb-ft of torque, it can hit 0-62mph in 9.3 seconds and carry on to 124mph. This makes it more powerful and faster than its rivals, but it will take more than speed to lure buyers away from the prestige of BMW.

Toyota knows this, so it has crammed as much equipment as possible into the T180 as bait. You get as standard a comprehensive list of goodies: run-flat tyres and pressure-monitoring do away with the need for the tailgate-mounted spare wheel, which improves the car’s looks.

The chrome grille and darkened glass looked particularly good on our black car, as did the 18-inch alloys and smoked headlights. Wheel arch extensions add to a leaner, more aggressive look.

Inside, drivers get full leather, cruise control, heated electric and retractable mirrors, an electric sunroof and automatic headlights. The seats are heated and electric, phones can be routed through the Bluetooth hands-free system and satellite navigation is also thrown in.

Despite its claim to have the most powerful engine in its class, its price lands the T180 in the same ring as the Land Rover Discovery. It may be bigger, but the 4x4 credibility and heritage Land Rover has cannot be discounted when deciding who to give your £27,000 to. For that you can pick up a 2.7 TDV6, which while less generous with the gizmos, boasts 189bhp and a prestige name.

But the RAV4 has other virtues, too. Build quality is excellent and the interior is comfortable and easy on the eye. The exterior embellishments give the car much more presence.

The T180 certainly shifts, with a wide band of power and plenty of torque in any gear.

However, the clutch can be a bit heavy if you have to spend prolonged times in traffic.

Handling is impressive when you consider the size of the car. It won’t rival any sports cars, but thanks to techno-trickery like Active Torque Control – which adjusts front/rear torque bias depending on where it’s needed – the RAV4 always feels composed and in control through corners. Despite the tall ride height there is never too much body roll.

On the motorway, the addition of a sixth gear as opposed to the petrol models’ five-speed ’box means engine noise is minimised while cruising.

Although it initially seems like a mismatch, Toyota has put enough kit into the T180 to give it a chance at rivalling the likes of BMW and Land Rover. 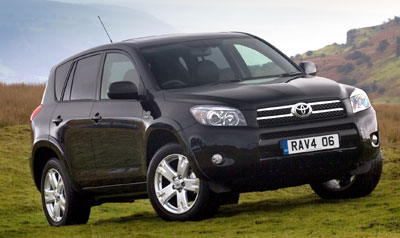 Whether the practicalities of decent styling, power and handling will tempt the badge snobs remains to be seen.