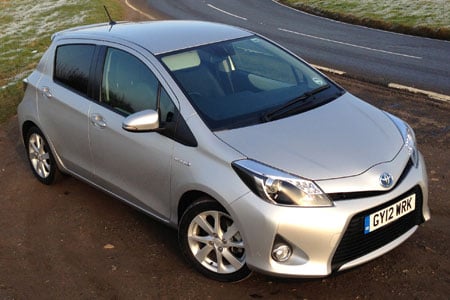 I’m pretty sure my friends and family are getting fed up with me whenever I give them a lift in the Yaris Hybrid.

When it’s running on full-electric mode at the start of any journey, which it can do for up to 1.2 miles, I can’t help but whistle a long, single note to emphasis the fact the engine isn’t running.

I have no doubt that it’s annoying and it’s a habit I thought would wear off quickly, but I still haven’t got past the novelty of the hybrid’s electric power.

Of course, my friends aren’t really interested in the technology, and they don’t share my enthusiasm for facts such as its CO2 emissions of 85g/km, or its official combined fuel economy of 79.3mpg.

What they care more about is whether the car is roomy, refined, well built and well equipped. It certainly fulfils all of that criteria.

Like me, they’re also big fans of the Yaris’s Touch & Go navigation and control interface – a £650 option – too.

This provides satellite navigation and advanced Bluetooth features, plus the ability to access to Google Local Search and connected services, such as live parking and fuel price information when linked to a compatible smartphone.

It can also display fuel economy records and an animated graphic which shows the energy flow between the petrol engine, battery and wheels when the Yaris is moving.

It also has an impressively intuitive iPod interface. When an iPod is plugged into the socket in the glovebox, it’s easy to find the track you’re looking for, and then displays the album cover on the screen. It’s a really nice touch.

All this is operated by just six buttons and a touchscreen which makes it very simple to use.

Less impressive, though, is my test fuel economy. The best I’ve achieved over a full tank has been 58.9mpg which is way off the official figure. However, my daily journey consists mainly of A-roads and very little urban driving – not the best recipe to get the most out of a hybrid.