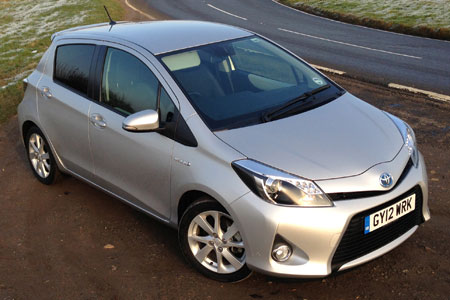 Toyota now has the widest range of sub-100g/km models of any car manufacturer, and most of them achieve their low CO2 emissions as a result of hybrid power.

The Yaris is the smallest Toyota model to use a petrol-electric powertrain and in its most efficient form achieves 79g/km and more than 80mpg on the combined cycle.

We took delivery in December of a top-of-the-range T Spirit version, which, on larger wheels than T3 and T4 derivatives, achieves 85g/km and 76.3mpg. This still makes it among the lowest-emitting cars on sale, and in the small car sector is a figure only matched or bettered by diesel rivals, which are subject to a 3% supplement on company car tax.

Our Yaris hybrid is fitted with Toyota’s Touch & Go navigation and control interface, and is also able to provide some internet services through the dashboard touchscreen when linked to a compatible smartphone.

The Yaris Hybrid also qualifies for a full discount on the London congestion charge and would also be well placed to continue to qualify should the CO2 threshold be reduced as a result of the current consultation to make more car owners have to pay the charge.

The Yaris is smaller on the outside than some cars in the sector, such as the Ford Fiesta and Vauxhall Corsa, but is roomy enough inside.

The battery pack for the hybrid system is packaged under the rear seats, so the Yaris Hybrid also has the same boot space as petrol and diesel versions.

Our car is a run-in model which was delivered with 4,000 miles on the clock. Although I’m not optimistic of achieving the official fuel consumption figure on my high-speed commute, I’ll be trying to adapt my driving style to see how much of a compromise is required, and to see how much fuel can be saved.

For companies paying AFR, an urban-based driver achieving good fuel economy in the Yaris Hybrid could be pocketing 10p per mile.