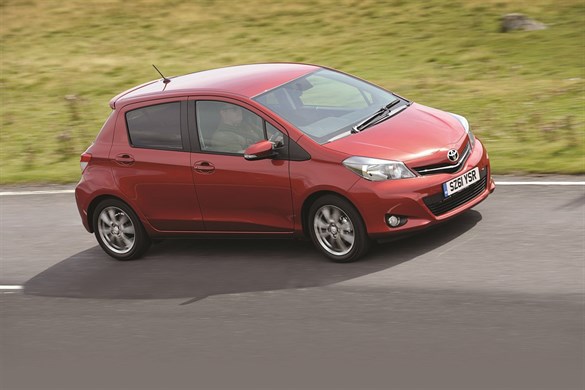 A European Car of the Year in its original incarnation, the Toyota Yaris goes into its third generation a more mature and arguably less exciting model.

It might have a lower profile in the fleet market than cars like the Vauxhall Corsa and Ford Fiesta, but Toyota claims it is less dependent on the daily rental sector than other small cars, and has a loyal following with public sector and health authority fleets.

The latest version retains many of the positive features that have made the Yaris a likable car. Although it’s longer than its predecessors, it is still more compact than most of the cars in its class at comfortably less than four metres long.

Some of the extra space has been used in creating more passenger room giving the latest Yaris a longer wheelbase than before. Its luggage capacity is competitive with the best in class, too, at close to 300 litres with the rear seats in place. It’s happy being driven around town, as you might expect, and is remarkably quiet on the move.

But the interior is a more sober affair. Those quirky LED instruments that disappeared at the facelift of the second-generation model haven’t made their way back for the latest version.

There are soft-touch panels across the dashboard and front doors, and to a certain extent it works. The Toyota Touch interface (including Bluetooth integration) is standard from mid-grade TR and upwards, and with TR, SR and T Spirit versions getting a free upgrade to Touch & Go navigation for the first six months of sales in the UK. Navigation also includes a first-in-class reversing camera.

Touch & Go also features Bluetooth streaming for music players, Google local search and the ability to connect with local information services, such as live parking information, petrol prices and weather reports. The feature is expected to show a residual values uplift over other models, so is worth having while offered as a free upgrade.

Toyota says the 2012 Yaris hybrid will offer class-leading CO2 emissions, but it’s a shame fleets will have to wait until then for a sub-100g/km version.