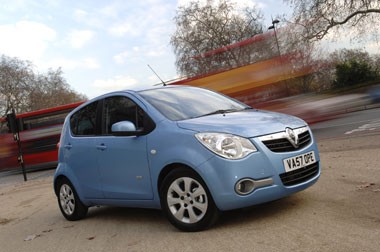 Vauxhall’s reputation for styling finesse took a knock when the griffin badge went on the back of a tall and spindly Japanese city car eight years ago.

But parent company General Motors Europe steered clear of repeating the mistake when it worked again with Suzuki for a second-time-around version of the Agila.

Though both corporations agreed to reduce the height of the replacement model, Vauxhall stylists in Germany took charge of shaping the next-generation run-about – and they’ve turned an ugly duckling into an automotive swan.

Offering Zafira and Meriva-like benefits in a smaller package, the mini ‘monocab’ model is longer and wider to make it more practical family transport.

But its cute new looks are set to play a major role in doubling the Luton firm’s penetration of one of the market sectors showing signs of growth.

Speaking at the UK launch of the range that Vauxhall will pitch against the Fiat Panda, Renault Modus, Honda Jazz and its near-identical twin, the Suzuki Splash, product manager Barry Scott said: “All the signs are that demand for an entry-level monocab product is likely to grow as motoring costs continue to rise.

“Our research shows the Agila should prove to be an attractive prospect to an increasing number of city-based women buyers who want pint-sized motoring with maximum flexibility.

“Five years ago, monocabs accounted for 9.5% of registrations but the proportion rose to 11.1% in 2007 after urban dwellers facing increasing pressure to downsize and reduce carbon emissions bought more than 94,000 cars of this type.

"One in every five Vauxhalls now has the monocab bodywork and we expect this area of the market will expand.”

Mr Scott added: “The old Agila served its purpose and did a good job, but we believe we have the perfect package in the new car.

"Despite being only 3.74 metres long, it has five doors, an impressive carrying capacity and a lot of thoughtful touches. It also looks great.”

Compared with its predecessor, the new car is bigger and has a more streamlined appearance to link it with the Corsa.

As before, it offers 1.0 or 1.2-litre petrol engines with a five-speed gearbox but the powertrain choice is widened with the option of four-speed automatic transmission on the larger petrol unit and the availability of the Corsa’s turbocharged 1.3-litre diesel.

Though both the smallest and largest engines boast 120g/km emissions, Vauxhall believes the mid-size unit will prove the most popular, driving 55% of sales.

Expression, the entry model available only in 1.0-litre form, has ABS, immobiliser and four airbags as standard, along with emergency brake assist, stereo/CD, power steering, tinted glass and 14-inch wheels.

A rear seat designed for three occupants means regular bootspace is minimal at 225 litres, but with the seat dropped, load space rises to a generous 1,050 litres.

Space is precious in a small car, and Vauxhall’s design team has made the most of every available inch.

Despite being slightly lower than the old model, it still provides the headroom that allows 6ft occupants to sit in the front and back in reasonable comfort and offers remarkable carrying capacity when the seats are folded flat.

The car’s interior is well laid out but trim embossed with big letters from the Agila name may not please everyone.

With light controls and a tight turning circle, this is an easy car to drive around town.

Our free-revving 1.2-litre version proved to be a spirited performer on the open road.

A £1,600 premium makes the diesel Club model expensive compared with the spirited and frugal 1.2 petrol version.

As funky as its predecessor was old-fashioned, the new Agila scores highly as a family runabout and deserves to be popular with the women customers Vauxhall is seeking.