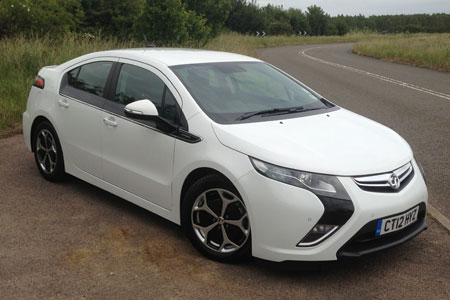 It’s more than a year since Vauxhall launched the Ampera in the UK, and Fleet News has recently taken delivery of one of those first vehicles.

Wearing a 12-plate and with almost 9,000 miles on the clock, it will be with us for the next six months which, with EV charging points at our Peterborough office, should give the Ampera a chance to shine.

I live 19 miles from the office so it’s possible for me to drive home from work and back the next morning without having to recharge.

If I plot a route that takes me through the low speed limits of Peterborough city centre I can complete the route with seven miles of battery range left, according to the on-board computer.

I’ve also had cause to use the car for a few longer trips over the first month, but the advantage of the Ampera over a pure electric plug-in car is that this type of occasional journey can be done without having to worry about range.

The bottom line is that after four weeks and around 500 miles it has used about half a tank of petrol (the tank is only 7.5 gallons) as most miles have been covered under plug-in charge.

This has given average fuel economy of 138.5mpg.

Of course, the official test cycle fuel consumption is a rather fanciful 235.4mpg, although readers will be familiar with the flaws of making fuel cost predictions on the basis of the official figures.

However, a fleet using the plug-in charge for 90% of the time could see a figure like that, and any company car achieving 138mpg would be music to the ears of any finance director.