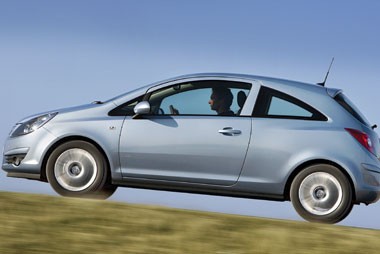 Vauxhall’s Corsa may have been overshadowed in the cut-throat supermini sector by more recent launches such as the Ford Fiesta and Volkswagen Polo, but these have done little to dim its popularity with fleets.

Last month it was the second best-selling supermini to fleets with 6,699 registrations – 1,085 behind the Fiesta, its traditional rival.

And while the Corsa may lack the pizzazz of some of its newer rivals, it has now added ultra-low running costs to its solid, all-round ability with a new Ecoflex model – available in Club and Life trim, but as a three-door only.

Offering official claimed economy of 70.6mpg, it emits 105g/km of CO2 – improvements of 9.8mpg and 14g/km on the outgoing model.

Key to the Corsa being able to offer these costs has been a raft of improvements, including a shorter second gear to improve its driveability around town, while taller fourth and fifth gear ratios provide increased economy at cruising speeds.

Other changes include lowering the Corsa’s ride height by 20mm, optimising airflow through its front air intakes, fitting low rolling resistance tyres, and a weight-saving package that cuts its kerbweight by 45kg.

As with Vauxhall’s Insignia Ecoflex (Fleet News, October 22), the changes have been achieved with very little compromise – the Corsa’s 1.3 CDTi engine offers enough torque and flexibility to easily cope with the changed gear ratios, while its traditional strengths of a comfortable ride and neat handling emerge unscathed too.

The interior is well-designed and built, although the rear passenger space is not as roomy as its newer rivals.

Judged solely on running costs, the Corsa Ecoflex would be a strong fleet package.

But as it is, the savings combined with the lack of compromises to the driving experience make it an excellent supermini option.