A VISION of Dickie Davies plopped into my brain recently. That’s because the Vauxhall Monaro I was driving reminded me of the mustachioed, silver-streaked TV presenter of 1970s sports show World of Sport.

If my childhood memory serves me right, it was on World of Sport that I first fell under the spell of the Bathurst 1000, the endurance saloon car race around Mount Panorama in Australia, where huge V8 Holden Commodores and Ford Falcons saloons battled each other rather discourteously.

The Monaro is a legacy of that Aussie tradition of building their cars big, brutal and boyish, and it has been performing at Mount Panorama with success recently, coming first and second last year.

So bringing it over here and putting a Vauxhall badge on it is an inspired idea. There’s no concession to European sensitivity or delicacy in this monster.

The Monaro is a Mad Max car, and while it may not be a fleet model, it does illustrate how Vauxhall is increasingly being led by the desire to sell exciting cars, rather than being held back by conservative, accountancy-led thinking. The VXR range, the VX220, the new Astra and the forthcoming Astra three door are all examples of this. The Monaro is an old-fashioned beast in a world of small capacity, turbo-charged, short-geared cars. It has a 5.7-litre pushrod V8 engine powering the rear wheels with 329bhp, and a vigorous 343lb-ft of torque. 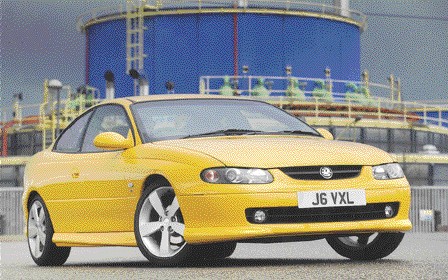 You would think this would make the Monaro a very fast car, but it doesn’t feel it. The Monaro is a big heavy thing for a start and the suspension is also surprisingly soft for a car trying to contain so much power, but it has huge amounts of grip.

Occupants also sit in big sports seats which have been covered in a thick layer of leather and foam. They’re superbly comfortable in the front and back.

The engine note is less raucous than the V8 in the MG ZT, but it makes a lovely burbling noise which turns into a bellow when you accelerate, while the gearlever has a long throw and takes an age to get from gear to gear. All of this makes the Monaro feel less manic than plenty of cars offering this performance.

Instead, it feels rather relaxed, especially in sixth chugging along at 60mph and barely any revs. It’s only when you floor it, wind the windows down and the shockwave from the air is battering into the sleek body and the engine is roaring like an angry elephant with tusk ache that you realise you’re doing warp speed. Cool.

The steering requires a fair old twirl to get a reaction – no doubt the legacy of long, straight Australian roads, but the VXR version has been sharpened. You probably wouldn’t want pin-sharp responses anyway. It’s a big, bruising, fast, comfortable cruising coupe.

At £28,650 on-the-road, you are getting a lot of car for the money. The Monaro comes packed with kit: leather seats with electric adjustment in the front, sunroof, automatic wipers and headlights, rear park assist, six CD system and climate control. Interior materials are not up to the standards of European cars such as the new Astra or the Vectra, but everything is clearly arranged and passengers can snuggle into the dark cabin.

The exterior is rather traditional: there are no post-modern slashes, jarring angles or gaping air vents as you might get on a European or Japanese performance car. Instead, the Monaro is a classily proportioned, hefty and muscular-looking car. It attracted appreciative crowds when it was parked and turned heads on the move.

Seeing half a dozen people crowded around your volume brand car as you approach it is a unique experience.

So would you want a user-chooser to be driving one? Well, it can be serviced in a Vauxhall dealership, the engine is proven and RVs are a decent 37% for 60,000 miles, but fuel bills would be astronomical as 19mpg is an average and the BIK tax bracket is stuck in the 35% band.

So probably not, but for the real enthusiast desperate to drive something different and not worried about running costs, it could prove a more sensible corporate choice than a Subaru Impreza, Mitsubishi Evo or Alfa Romeo 156 GTA.

It might be a little unrefined, but it’s a ‘does what it says on the tin’ car, and I loved it. I’m sure Dickie Davies would approve.