REPLACING a dominant market leader is a tough challenge, particularly in a sector as competitive as the mini-MPV class.

Since the Zafira’s launch in 1999, several imitators have launched aiming to steal some of Vauxhall’s thunder, particularly with respect to its innovative interior layout with its clever seven-seat system which allows chairs to be stowed away under the floor.

So while the new Zafira is warmly welcomed as the next generation of the car that pioneered the seven-seat concept in this class, stiff competition from rivals ensures it is perhaps not the obvious choice it once was.

Nevertheless, there are some extremely good reasons to look hard at the new Zafira. With those years of experience with the old model, and a great product in the first place, Vauxhall has a head start in the thoughtful design that needs to be part of such a car.

And with popularity of diesel at an all-time high, especially before the January 1 benefit-in-kind tax changes (when all diesels, regardless of whether they’re Euro IV-compliant or not, will incur a 3% surcharge), Vauxhall is well-placed to clean up with its state-of-the-art Euro IV CDTi units.

The diesels are part of an engine range which includes three 16-valve petrol units in 1.6, 2.0 turbo and 2.2-litre guises delivering 104bhp, 197bhp and 148bhp respectively.

Furthermore, Vauxhall is keen to ‘push the envelope’ with the new Zafira: the arrival in September of a new 2.0-litre 237bhp turbo VXR model promises to put performance on a par with practicality. 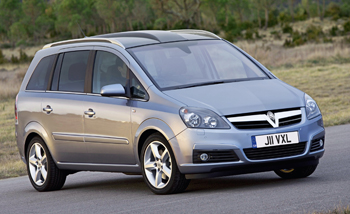 And that’s not as daft as it sounds for a mini-MPV: in a sector clearly aimed at practical family motoring the old Zafira GSi was an unexpectedly strong performer in the sales charts.

First impressions are of a car that looks good, if a little transatlantic in style. With design cues echoing the new Astra and a deal more style and panache than the old one, the new Zafira is a sensible evolution of the old model and a whole lot more desirable.

For the family-minded it’s supremely thought out: the square profile of the rear doors is great for lumping child seats in and out, and the outermost seats benefit from ISOFIX child seat fixings. The FlexOrganiser storage system (a bargain £50 extra) is a genuine masterstroke, allowing all kinds of bags, nets and holders to be mounted safely in the boot area.

The Flex7 seat folding arrangement is unaltered from before. Good. Compared with, say, a Renault Grand Scenic where the middle row seats move individually on greased runners, the Vauxhall’s bench, which slides back and forth on roller bearings, is a boon.

Although you can’t remove the middle seats altogether (unlike in the Renault), it is unlikely you will need to as the Zafira’s interior is one of the most capacious in its class – and in any case the safety implications of the solid barrier formed by the folded seats are a worthwhile pay-off which will prevent luggage shifting towards the front seat occupants in an accident.

Such attention to detail has gained the Zafira a five-star Euro NCAP with an impressive four stars for child protection and two for pedestrian safety.

In typical German fashion, the charcoal grey interiors of all the test cars were somewhat sombre. There’s no question over quality, but the impression is a little gloomy, and it feels hot inside on a warm day as a result, despite efficient air conditioning.

I also found the much-vaunted panoramic glass roof with integrated storage (an £850 option) laudable as a concept but a bit of a let-down in practice. In theory, it is a good idea with its drop-down storage compartments and glass areas.

But in reality, small children are unable to reach the rear compartments to open them, so storing chocolate in them (and who doesn’t with children?) is a no-no because they get so hot under the sun. 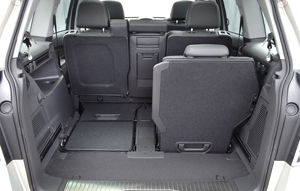 It is a legacy of its great crash protection credentials that the new Zafira has large and intrusive A-pillars – the bugbear of MPV design. Coupled with a larger than expected door frame leading edge, it makes for a significant blindspot for the driver.

Vauxhall should take a lead from Renault in this respect: the Grand Scenic – also a five-star Euro NCAP winner – benefits from much thinner pillars.

Behind the wheel, and once you’ve got used to the blindspot, the Zafira is competent to drive with easy to use controls and an attractive instrument layout.

But the ride is needlessly hard with the Sports Chassis Pack (a £650 option) fitted to the Design model we tested – the standard set-up is softer and generally better – while the seats could be more supportive.

Of the engines I tried, the 1.6-litre 104bhp petrol unit struggles, even with driver only on board. Thankfully, a new higher-efficiency 1.8 petrol engine with 138bhp will be offered from September to coincide with the launch of the hot VXR version. Even so, the very excellent 118bhp or 148bhp CDTi diesels, which are punchy, quiet, very economical and clean, are a much better choice for company car drivers.

A strong development of the pioneering original and Vauxhall is bold in offering high-performance models in a bid to help user-choosers looking for individuality move away from a ‘family’ image.

Thoughtful attention to detail, the excellent Flex7 seat folding system and a capacious cabin are further plus points, and the Zafira is not bad to drive, with diesel power the best choice. Only the sombre interior trim, a hard ride with the Sport pack and that front three-quarter blindspot let it down.