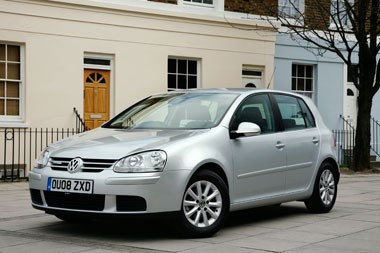 Somebody somewhere really ought to think a little harder about the names of these new low emission cars manufacturers are launching.

Like thoroughbred racehorses, all sired from three Arabian stallions hundreds of years ago, these brands seem to be derived from about three points of origin: ‘blue’, ‘green’ and ‘eco’.

Only BMW’s Efficient-Dynamics seems to be made from a different template.

But of the burgeoning number of ecobrands (see, even I’m at it), BMWs effort apart, BlueMotion probably has had the most traction so far, as marketers call it, thanks to the high profile of the Polo BlueMotion, which offers 99g/km CO2 levels.

But now there is a new model whose size and refinement should better suit high mileage company car drivers: the Golf BlueMotion.

It is the first in a long line of new Bluemotions now available to order that will eventually include Golf Plus, Golf Estate, Jetta, Passat saloon and Estate.

What Volkswagen has done is detune its trusty 1.9-litre turbo diesel engine to 103bhp (as Audi has done with its low emission A3), link it to a particulate filter and revise a number of elements to make the car run more efficiently.

These include longer gear ratios for third, fourth and fifth, a new turbocharger, software which reduces the engine’s idling speed and harder compound, and therefore lower rolling resistance, tyres.

There are also revised aerodynamics on the underside that help reduce drag, and the grille has been partially enclosed to encourage the same effect.

There’s also a gearchange indicator on the dash, but with air conditioning – the usual culprit of fuel inefficiency – standard across all models, Volkswagen has recognised that it can’t expect drivers to wear an environmental hair shirt all the time.

Having said that, the as-tested S model (the photo shows a Match with alloy wheels) is very basically specced.

All these little nips and tucks have managed to scrape the Golf BlueMotion under the all important 120g/km threshold, which means lower tax and VED, and a 100% discount from the London congestion charge.

At 119g/km, company car drivers will be paying only 13% on the taxable value of the car and with a fair wind and judicious use of gears and the accelerator, should get somewhere near the official 62.8mpg consumption.

In terms of the way it drives, don’t expect fireworks.

The 1.9-litre VW Group diesel engine has never been especially silky and in the BlueMotion it feels very chuggy, even at idle.

On the move, you do have to concentrate on your gear choices – get it wrong and you’ll either rev the pistons off it and stand it on its nose, changing down into the short second, or feel as though you’ve just driven into treacle if you change up to early into third, fourth or fifth.

Get the gears right and it’s just an acceptably pedestrian Golf.

But the BlueMotion does the job prescribed for it, being low emitting and offering drivers a cheap tax option that sips fuel.

Other than that, it’s a typical Golf, which makes it worth a look for many company car drivers.

Some won’t care much for it, wanting more bang for their buck, but for those looking to minimise their costs, it will be just the thing.

These four diesel hatches are touted by their makers as the low emission offerings in their ranges.

The French have done a good job of building such cars, witnessed by the 308, C4 and Megane. The obvious contender – Ford’s Focus ECOnetic – isn’t in this test because few have seen it.

In terms of CO2, the 308 is a little on the high side. Although still low in the context of the market, it misses out on the new low CO2 tax banding and is instead rated at 18%, while the others qualify for the 13% tax band making the C4 the cheapest at £32 for a 20% taxpayer.

The French might be good at building low emission diesel engines, but they don’t have a great track record for the rest of the car and as a result there seems to be a fair amount of contingency built into the Megane and C4’s pence per mile figures.The 308 however, stacks up well against the trusty Volkswagen.

The conscientious driver can get a potential 60mpg. The Golf is best, but is a few pounds ahead of the Megane. The VW’s 55-litre tank allows the possibility of 700-plus miles between fill-ups. The 308 is more expensive, but you do get more performance for your money.

The Golf is a clear winner because it depreciates slowly, and sips fuel slowly too, while having controlled service maintenance and repair costs. At more than £1,000 cheaper than the next best over 60,000, it is a comprehensive margin in a sector dominated by low running costs.

The Golf is a bit slow and on the noisy side, but you can’t ignore the figures – which is what choosing a low emission car is mainly about – and on that front it delivers in spades.

The other cars here all do a decent job but the Golf has everything.

Slow depreciation, low CO2 emissions and tax, high fuel efficiency and a brand image through BlueMotion that lets the world know you’re doing your bit and you don’t mind sacrificing some performance and luxury to do so.