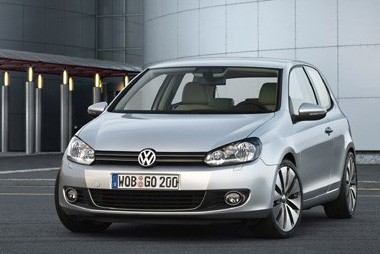 There is a whole host of clever electronic devices which are fitted to the new Volkswagen Golf, but it is something that has been left out which is the most striking thing about the sixth-generation of the model.

And the thing that has been left out is noise. Volkswagen claims that the new Golf, which opens for ordering in December and goes on sale in January, “sets new benchmarks in the class for refinement”. And this is no idle boast, because it is the refinement and noise suppression which stand out when driving the car.

As a car to cover big miles in the Golf has got even better, and with up to half of the projected 60,000 sales next year going to fleet buyers, Volkswagen can be assured that its iconic hatchback will remain a popular user-chooser car.

That 60,000-unit projection is down on what the current model has achieved – 67,750 sales in 2007, but the launch of the similarly sized and priced Scirocco ‘coupe’ will undoubtedly steal a few sales away from its stablemate.

In fleet terms the new Golf should build on the excellent base of the out-going model, which is still commanding strong residual value predictions.

According to CAP the current model will still retain up to 42% of its cost new after three years and 60,000 miles, so no doubt the newer, better model will increase on this.

Visually the new Golf adopts the slanting and more aggressive front-end treatment from the Scirocco, while the blocky rear styling hints at an air of solidity.

This is no radical overhaul, simply the refining of a legend.

And it’s the same story inside, with that solid feeling carrying through thanks to the use of better quality materials.

As well as refining the drive, Volkswagen has also increased safety levels. The main advance is the adoption of WOKS – whiplash optimised head restraint system – which reduces the risk of neck injuries in an accident.

Also fitted as standard are seven airbags (including a knee bag for the driver), ESP stability control and belt-up reminders for the rear seatbelts. A five-star EuroNCAP score is surely a rubber stamp away.


Next year Volkswagen will introduce two further systems as options – ParkAssist, the self-parking device already seen on the Touran, and automatic distance control (ADC) – an active cruise control system which regulates the car’s speed and distance from the vehicle in front.

At launch there will be a choice of four petrol engines and two diesels.

In the diesel camp, a new 110bhp TDI diesel joins the line-up, offering claimed combined economy of 62.8mpg and CO2 emissions of 119g/km to qualify for the lowest diesel benefit-in-kind tax band, and a 140bhp version. Transmission options are five or six-speed manual and six or seven-speed DSG semi-automatics.

Further developments will arrive in the middle of next year, with the 99g/km BlueMotion model and the sporty GTI version, both of which will appear at next month’s Paris Motor Show.

There’s also a clever TwinDrive hybrid model, which uses a mix of electric motor with either a petrol or diesel engine. This plug-in hybrid is currently undergoing fleet trials in Germany, and Volkswagen has hinted at a production version by 2010.

The Golf line-up which it goes on sale in January will be S, SE and GT trim levels, with prices ranging from around £13,000 for the three-door S and rising to £21,000 for the five-door GT.

See more images of the new Golf in our Golf image gallery.

Like the gentle reworking of the exterior, there’s nothing amazing inside – just solid, dependable, logical Volkswagen.

The dashboard is familiar from the Eos, although the quality of materials used has been ramped up, such as the carpeted insides of the door bins. A nice touch.

At the launch only DSG semi-automatic gearbox models were available to test, with a choice of petrol and diesel engines.

The 120bhp petrol unit felt feisty and keen to rev, partly thanks to the new seven-speed gearbox which ensures it is always in the power band when acceleration is required.

It accelerates up to motorway speeds with ease, and while there settles into a relaxed and refined gait. That sound-deadening focus really has worked, with the Golf being very quiet on the motorway.

Over to the 140bhp diesel, and the impressive work continues. Naturally, this TDI Golf has far more low-end shove thanks to the greater torque, but it too remains quiet at speed.

While the Golf is never going to win any dynamism prizes, it handles comfortably and corners with a solid, four-square stance with little in the way of corner roll.

However, all the test cars were fitted with the ACC adjustable suspension system, but even flitting between ‘sport’ and ‘comfort’ made little difference to the overall feeling of competence.

There was precious little wrong with the current Golf, so Volkswagen’s efforts at improving it further only bring more desirability to the brand.

Better looking, better to drive and better equipped – the new Golf is a guaranteed success.