VOLKSWAGEN will be aiming to prove that size really does matter when a Big Brother version of the Golf is rolled out this summer.

Taller than the ubiquitous standard car by 95mm, the new Plus model boasts substantially more interior space, has raised seating and comes with a flexible cargo area that can be tailored to carry luggage volumes between 395 litres and 505 litres.

But despite being developed to take on the Focus C-Max and Renault’s Scenic, the Golf hasn’t had a course of steroids to turn it into full-blown multi-purpose transport, insists Volkswagen UK.

Product marketing manager Rob McAllister said: ‘This is still the family car it always has been – we just think that adding a little to the height makes a big difference to the overall package and allows it to bridge the gap between the Golf and the Touran.

‘The Plus is undoubtedly a lot more useful for all aspects of family and business motoring – and it shows that size does matter if you want maximum versatility.’ Featuring a rear seat assembly that allows 160mm of lengthways adjustment, the interior of the Plus can be configured to accommodate a 6ft 2in rear-seat passenger behind a driver of similar size, in comfort.

‘Even in this position, the rear seat still allows bootspace of 395 litres, and folding down the 60-40 split assembly to provide an almost flat floor opens up a 1,450-litre cargo area that would do credit to a small delivery van,’ McAllister told Fleet NewsNet.

In addition, one of the biggest underfloor stowage areas on a C-sector car makes another 200 litres of space available.

Speaking at the international media launch of the Golf Plus in Spain, McAllister said interior packaging would be the key element of the marketing campaign when the model reaches UK showrooms in June.

‘We’ve carried out research that reveals the main reasons why people buy MPVs are based around practicality, functionality and good carrying capacity. But buyers of hatchback models have different requirements.

‘They are more interested in styling, kerbside presence, economy and reliability – and we believe a significant number of them are reluctant to make the switch from hatchback to MPV, but are driven to it only because they need extra space. Our new alternative will provide more room, but is also an attractive car, so we think it fills the gap between the two extremes.

‘We’re convinced a lot of customers will see the Plus as a best-of-both-worlds solution to their needs because it has a bigger passenger compartment and greater luggage capability while taking up no more ground space than the regular Golf,’ he said.

Volkswagen AG marketing chief Jorn Hinrichs said: ‘Potential customers are already telling us they like this compromise, particularly as it comes with all the quality, technology, safety and economy they expect from Volkswagen.

‘With a combined total production of more than 23 million units, the Golf is the world’s most successful car range. Although we call this version the Plus, it will only carry the Golf badge because we regard it as an evolution that will strengthen the unique position of our range in the marketplace.’

Hinrichs believes the new version offers the roominess and quality of larger and more expensive cars and he believes it will account for 25% of total Golf sales across Europe. But even though around 18,000 examples of the Plus are bound for UK showrooms this year, British registrations of the Golf are likely to increase by no more than 5,000 units overall.

McAllister explained: ‘We are expecting some substitution for the regular hatchback and Touran models, but we have no doubt that we will win new business with this car, with around half the volume going to the fleet market.’

Domestic market customers will be charged an extra 535 euros for the Plus, but VW UK is planning a premium of between £500 and £600 compared with the regular five-door hatchback.

The car will mirror its smaller stablemate by coming in S, SE and Sport trim levels. Petrol engines of 1.4-litre and 1.6-litre capacities will be available from launch, along with the familiar 1.9-litre and two-litre turbodiesel units.

GT versions featuring the top TDI and FSI motors will complete the line-up, but a GTI model has been ruled out following a decision against diluting the appeal of what VW board members regard as a special product.

Next year, all-drive variants featuring the 4-Motion system will come on stream and it is possible the Plus could form the basis of the next Golf estate.

Though it shares its underpinnings with the regular Golf, the Plus has completely different panelwork that bears an uncanny resemblance to the Peugeot 307 – another car highlighted as a major rival in the company’s press information pack.

But styling chief Urs Rahmer maintained the likeness was a pure coincidence. ‘We simply worked to a brief that was based on countering the fragmentation of the market and meeting different demands from customers. We never carried out a benchmarking exercise and the fact that we finished the design of the Plus at the end of 2000 proves we couldn’t have been influenced by the Peugeot,’ he told Fleet NewsNet. 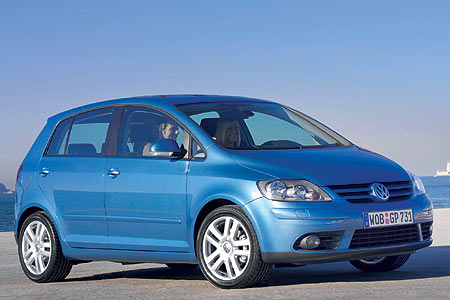 Although detailed prices will not be announced until nearer launch, VW UK has confirmed that standard safety equipment on the Plus will include electronic stability control and driver, front passenger, front side and curtain airbags.

The car will be the first in its class with fast-response rear LED lighting – another significant safety feature – and it is set to break fresh ground by making mains electricity available via a domestic-style three-pin plug socket built into the rear compartment.

This novel option will use an inverter to turn the 12-volt system of the Plus into a 230-volt power source. As it is intended as a charger point for laptop computers, the supply will be limited to 150 watts – but the socket will still have sufficient power to boil a low-wattage kettle. Other items on the options list include active curve headlamps, a DVD player and a fridge.

IT has a different appearance, but pure Golf running gear gives the Plus flawless road manners, irrespective of surface irregularities. If anything, the car’s multi-link rear suspension provides a slightly smoother ride than that of the donor model, so it’s potentially even better suited to long-haul use.

Good aerodynamics mean performance is also on a par with the Golf, with the 1.6-litre version we tried, providing quiet and unruffled progress. As ever though, the diesel units are unmatched for all-round ability and relaxed cruising and the DSG transmission fitted to both test models proved a delight over the test circuit’s twisty sections.

With up to 43 storage areas available, depending on trim, the new interior is practical and has a high-grade finish. Getting in and out is particularly easy and some neat engineering makes light work of changing the rear seat configuration. Yet for all its space, the Plus is best regarded as four-seat transport because comfort in the centre part of the rear seat, which doubles as a table and stowage box, is not as good as elsewhere.

FORD’S premium for the C-Max is more than double the amount VW has in mind for its more capable version of the Golf, so the Plus is a high-value package as well as looking an attractive proposition for the family or business driver who needs extra space for luggage.

However, with Golf residuals continuing to be so strong, it seems unlikely that the Plus will maintain the premium over the standard version when it reaches the used car market.