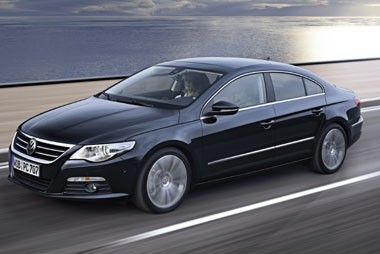 Volkswagen’s Passat has become a staple of the British fleet scene, but now the German
manufacturer is launching a new niche version which it believes may well steal sales from the existing saloon and estate models.

Due to be in the showrooms later this year, the Passat CC blends coupé-like styling with a four-door bodyshell, copying the success of the Mercedes-Benz CLS.

Volkswagen believes the arrival of the CC will pave the way for it to drive deeper into business motoring by winning valuable extra registrations from the makers of premium models.

Executives are confident that the combination of dramatic design and innovative packaging is set to take the new top version of their benchmark fleet and family saloon into the territory dominated by Audi, BMW and Mercedes-Benz.

Head of fleet services Vincent Kinner said: “This is the first time we have tried to stylise one of our products and the result is a lot of car for a very competitive price.

"It’s a unique proposition for user-choosers and we’ve deliberately under-cooled the volume – I’d rather have high demand than over-supply, particularly in a volatile market.

“Volkswagen is now in the position of being an aspirational brand as well as one with highly desirable products.

I’m confident about the CC – it’s imaginative in both design and specification.”

Volkswagen UK plans to charge a premium of around £1,000 for the longer, wider and lower version it will position as middle management transport.

According to the manufacturer, it identified a gap between the Passat and the luxury Phaeton model and then came up with the CC concept.

The production model shares 55% of the regular Passat’s components, although every body panel is changed.

Marketing manager Andrew Waite added: “This is a four-door saloon that just happens to be a 2+2 with four full-size seats.

"It’s a functional car that has the feel of a coupé and it should be a big hit with fleet drivers.

“Our research shows it will attract customers from a variety of segments, but the important point is that the CC stretches our brand into the premium sector – that’s what it is all about.”

Three petrol and two diesel engines will be available from launch with higher power TDI and TSI units arriving by the end of the year.

Fleet is expected to account for 80% of registrations with the 140bhp 2.0 TDI diesel unit driving 82% of total sales.

To be offered in base form and as a GT, the new model has sports suspension, 17-inch alloy wheels, dual-zone climate control, a touchscreen CD autochanger stereo system, electrically-
operated front seats, a split-fold rear backrest and a multi-function steering wheel as standard.

Everything about the CC is different – even the door mirrors and boot lid badge have been redesigned – and the car makes its bid for upmarket recognition with a bolder, more dramatic appearance, reminiscent of the Mercedes-Benz CLS.

It follows this up with a significantly lower roofline, frameless windows and a heavily revised interior.

Innovations in vehicle dynamics also reinforce the claim that this is the new premium kid on the block.

The CC is the first Volkswagen to be available with an ACC system to provide the best compromise in handling agility and ride comfort in a choice of three modes.

Linked to the electro-mechanical power steering, it plays a big part in delivering the impeccable road manners expected of premium cars.

Lane assist gadgetry that gently tugs the steering wheel should you start to veer off course is optional, along with park assist, which allows the car to slot into parallel parking spaces automatically.

Compared with the regular Passat, the CC has a three-spoke steering wheel with multi-function keys, revised instrumentation, a new climate control system and different door inserts.

Despite 50mm being trimmed off its overall height, headroom is good and remains sufficient for tall occupants in the rear, which has two individually contoured sports seats shaped to provide lateral support.

Between them is a large central compartment under a sliding cover providing cup holders and a box for additional storage.

Volkswagen has made such a great job of this car that it should have been given another name to prevent confusion and differentiate it from the more mass-market Passat saloon
and estate.

With sleek styling and proven mechanicals it should prove to be a big hit with fleets.