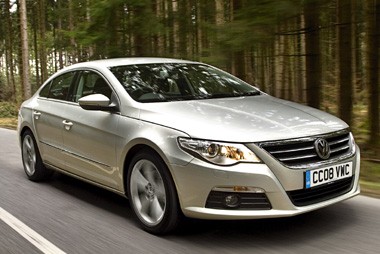 But the world is moving on, and previously straightforward definitions are changing too.

Black is white, up is down, and saloons are now coupés.

At least, they are if you ask Volkswagen. It saw the step that Mercedes-Benz took with its “four-door coupé”, the CLS, and decided to get in on the action.

The result is a four-door coupé version of the Passat.

If that wasn’t confusing enough, it’s called the Passat CC, despite not being a coupé-cabriolet nor having a folding roof at all.

The Passat CC’s role is to fill a niche between the volume market, represented by the common-or-garden Passat, and the luxury market, occupied by more expensive brands.

It’s based on its vanilla-flavoured sibling, but has been lengthened, widened and lowered to give it a sleeker look.

The exterior styling reflects this – there are definite Passat features there, but they’ve been tweaked, tucked and slicked back.

Inside, the already impressive standard Passat interior has been improved upon, using the luxury Phaeton as inspiration.

The most obvious change is in the back. This is strictly a four-seater.

On the plus side, this means the two back seats are much more contoured and supportive than a standard bench, although the lower roofline means headspace is at a premium.

The rear seats still fold and, combined with a large 532-litre boot, mean plenty of room for lugging.

I managed to transport three people, two surfboards, wetsuits, bags and two sets of inline skates with room to spare.

Just two trim levels are available – the entry-level CC that we tried and the top-of-the-range GT.

The alloys are 17-inches in diameter and there is two-zone climate control.

Its party piece is detecting a space big enough to parallel park as you drive past it.

Put the car in reverse and press the throttle, and the car steers itself into the space as your passengers gawp open-mouthed.

We tried the 1.8-litre TSI petrol engine, which is mated to a six-speed manual gearbox. The unit develops 158bhp and will hit 62mph in 8.6 seconds.

The Passat CC has power and style without brashness or arrogance.

It maintains its composure along B-roads and will happily cover motorway miles without too much sleep-inducing waft.

It’s a grown-up car that does things properly, in an understated and immaculately groomed way.

The Honda is cheapest to buy and comes with plenty of kit, including cruise control and Bluetooth as standard.

The 318i has smaller alloys yet is more expensive.

With much lower emissions than its rivals, the BMW falls into a lower tax band and will cost £113 a month in BIK tax for a 40% taxpayer.

The Volkswagen tails behind in last place with a monthly payment of £167.

All the cars here have variable service intervals, which help to keep costs down, and all have 17-inch tyres with the exception of the 3 Series, on 16-inch rims.

Despite this, the BMW can’t beat the Honda over three years/60,000 miles.

These two and the Volkswagen are close, with Audi labour rates putting it behind.

With a combined mpg of 47.9mpg, the BMW is comfortably the cheapest car to fuel.

In second place, although some way behind, is the Audi with 39.8mpg, closely followed by the Honda with 39.2mpg.

The Volkswagen is slightly out of contention, returning 37.2mpg.

The Audi plays its trump card. With a residual value of 44% according to CAP, it wipes the floor with the competition.

The total cost over three years/ 60,000 miles is very close between the Audi, BMW and Honda.

But the Audi just shades it thanks to its impressive RVs. The BMW is cheap to fuel, while the Accord is cheap to buy.

The Passat fails to shine in any area financially.

Although the BMW is a strong all-rounder, the hugely impressive RVs of the A4 mean it is the cheapest to run.

But it’s not as powerful as the BMW, which in turn is less powerful and has less standard equipment than the Honda, which is only a few hundred pounds more expensive.

So this becomes a very tight decision. In the end, the heart says go for the BMW.

It costs slightly more than the Audi overall, but user-choosers will appreciate cheaper tax and greater fuel economy and it remains a great value option.

The Passat CC, while a good car in its own right, doesn’t stack up financially in this company.