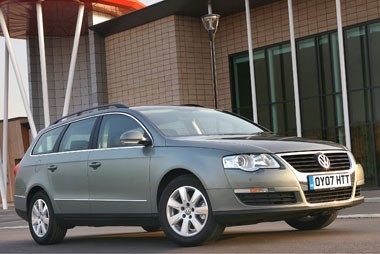 It’s a generally acknowledged reality that a vehicle’s fuel consumption figure quoted by the manufacturer is about as attainable as the perfect round of golf.

MPG figures are measured in laboratories, not in the real world where life conspires to reduce our fuel economy at every turn.

So imagine my surprise when I read the official fuel consumption figure for the Volkswagen Passat BlueMotion estate and found that on the first couple of days testing, I’d exceeded it.

Volkswagen says the car will achieve 54.3mpg on the combined cycle, but on a trip from Rutland to London, I’d managed in excess of 55mpg.

Even more surprising is that the BlueMotion doesn’t feel like a slimmed down eco-car.

Perhaps I was expecting the engineers to have dropped the power to a minimum and ripped out anything unnecessary to lower the car’s weight, but they haven’t. It looks and feels pretty much like any other upper-medium estate car.

From the outside, the only visual indicator to this Volkswagen’s frugality, BlueMotion badges aside, is a redesigned chrome grille.

There are other tweaks to reduce aerodynamic drag over the standard Passat, but you’d need to know they were there to notice.

Inside, it’s Passat as usual – only a shift indicator light on the dashboard is noticeably new.

But under the skin the engine management system has been messed about with, and the five-speed gearbox has long gearing to improve efficiency.

It’ll power the car to 62mph in a leisurely 12.1 seconds, which isn’t particularly quick, but it has enough torque to not leave you cursing the BlueMotion badge as you try and get out of a slip road before a lorry bears down on you.

The engine noise is a trifle clattery, but the delivery is smooth enough.

The rest of the driving experience is the same as the Passat ever was – undramatic, solid handling, comfortable.

In terms of equipment, the BlueMotion has everything you’d expect – ESP and traction control are standard, as are 16-inch alloys and climate control.

You also get cruise control and roof rails (although surely the drag would be reduced still further if these weren’t included?).

You pay a premium over more standard Passats, but not much.

When you consider that the BlueMotion includes cruise control as standard, has some nice chrome detailing on the outside and includes a better trip computer, not to mention the environmental benefits, it starts to look very good value.

I’m impressed by the Passat BlueMotion. It doesn’t scrimp on the driving experience expected of a mid-level estate car.

If you make an effort to drive economically enough to hit the claimed fuel economy, a single tank of diesel will get you more than 800 miles.

With fuel prices rocketing that’s a huge plus for the money-conscious driver, and should leave just enough in your pocket to spend on a few more golf lessons.

Despite being cheapest, the Laguna boasts a part-leather interior and 108bhp.

The Passat sits second with 104bhp while the third-placed Ford has just 99bhp and steel wheels, but more torque than its rivals.

The C5 is a little way adrift but has the most power with 110bhp.

Another win for the Renault, which emits the least amount of CO2 and, alongside the Passat, falls into the 18% company car tax band.

Variable service intervals contribute to the Volkswagen being the cheapest to service, maintain and repair over a fleet life of three years/60,000 miles.

Next is the Laguna, with a lengthy 18,000 miles between servicing, while the Mondeo and C5 need attention every 12,500 miles.

Top marks to the Laguna again. Its claimed fuel economy of 56.5mpg makes it the cheapest car to fuel over three years/60,000 miles.

The Passat is not far behind with 54.3mpg, but the Ford and Citroën are outclassed.

They share the same costs and the same mpg of 49.6.

A 35% residual value (according to CAP) means the Laguna loses the least over three years/60,000 miles.

The Citroën completes a French one-two with an RV of 36%, while the Passat, not helped by its age, is close behind with 34%.

The Mondeo’s 33% RV puts it out of contention.

Strong showings all round make the Renault the cheapest car to run over three years/60,000 miles.

The Passat is second, let down by its age and subsequently lower RV.

The Ford’s relatively low residuals push it down to third, while the Citroën comes last with only decent residuals.

Having come top in every category bar one, the Laguna was always going to be the winner here.

It doesn’t crow about its environmental credentials in the way that the Passat BlueMotion does, but the Renault manages to be cheaper to buy, more powerful and lower emitting than the Volkswagen.

It also benefits from being a newer car than the Passat, with a better residual value prediction and increased fuel economy.

And drivers will like the slightly more upmarket part-leather interior.

The Mondeo and C5 are let down by their higher running costs.