DESPITE strong credentials as a company car, there are a handful of niggles about our long-term test Passat that annoy me.

The electronic handbrake and ‘press and drive’ key features I’ve just about got used to and subconsciously I now know that to operate the handbrake you need to depress the brake pedal and to start the car you need to press down the clutch before pressing in the key. Or is it the other way round?

Both technologies mean there’s extra space between the driver and passenger compartment where a traditional handbrake would sit and there’s no dangling metal key heading straight for your right knee-cap in the event of an accident.

The parking button to the right of the steering wheel illuminates when activated but on a recent hot day, with the sun beaming through the window, while waiting at a level crossing, I couldn’t tell whether it was on or not. I didn’t want to find out by rolling into the car behind so ensured my foot was planted on the brake pedal.

It was then I pressed the ‘auto-hold’ button in the centre console and found the answer to my problem. It operates as a hill-hold function and holds the car’s position when it’s stationary and out of gear with the engine running. It’s standard with DSG and automatic boxes but costs an extra £35 with the manual ’box.

For some reason, while getting used to the car, I stalled it on a couple of occasions, something a colleague also did when he first got behind the wheel.

It now means I rev the engine quite hard before pulling away, an overcompensation that may have dented our test fuel economy.

Once I’d mastered the aforementioned peculiarities, I’ve found the Passat a joy to drive. It’s perfect for long journeys, offering high levels of comfort, ample space and an excellent ride.

A glitch in the fuelling that was raised in our last test piece seems to have sorted itself out. The author noted that when travelling in fourth gear at about 60mph there was an initial hesitancy in the engine when he pressed the throttle to overtake.

We’ve also had to book the car into a local garage as the engine warning light has come on a couple of times, putting the car into ‘limp home’ mode.

Once restarted, it corrects itself so it may well be a glitch in the system rather than a more serious techanical problem.

We’ll let you know the result of the dealer’s findings in the next report. 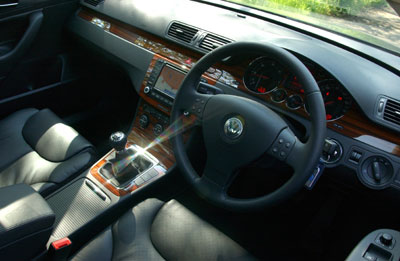