THERE has been a lot of talk about biodiesel recently as the world awaits the end of fossil fuels.

No matter what your views – personally, considering they are currently ripping down vast swathes of the rainforest to grow palm oil to make into biodiesel, I think it is a false dawn for the environment – officials want us to use it.

The European target is for 5% of all fuel sold to be biodiesel by 2010. But there’s a problem – and a big one. Take our long-term Volkswagen Passat, with a 2.0 TDI VW Group engine.

It has done about 6,500 miles and should be good for at least four more years if you feel like running a company car that long.

But inside the fuel filler cap, there is a great big logo warning drivers not to put biodiesel into the fuel tank.

I checked with Volkswagen and a spokesman said the 2.0-litre engine was ‘too sophisticated’ to take any level of biodiesel mix.

So, if biodiesel becomes the universal fuel in the next few years, what are all these Passat drivers going to put in their tanks? Part of the problem is the legal definition of what counts as biodiesel – it can be practically anything at the moment – and the varying quality of supply in the market. 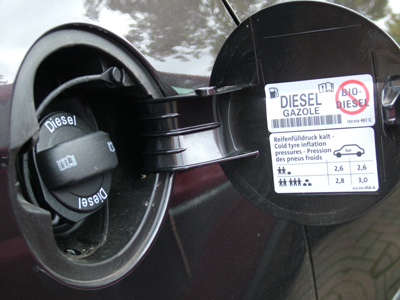 Oddly, VW’s sister company Audi is happy with a 5% mix, but discourages any use of biofuels until clear standards have been met and maintained by suppliers. It also points out that biodiesel can’t be used on cars with particulate filters.

In the 600-700 miles between fuel stops, you can stop worrying about this confusion – the Passat has proved a joy to drive. As previous testers have pointed out, the starting procedure is a bit weird, but the push button handbrake is easy to use.

The ‘hold’ feature, which stops the car rolling backwards on a hill is brilliant too, although I hate the fact that it needs to be turned on each time you start the engine.

The engine, running happily on normal diesel, is pretty vocal and feels what can only be described as lumpy when setting off. But it becomes quieter at speeds and motorway driving is both effortless and incredibly economical.

Although my 42mpg is better than the figure achieved by previous testers, it is still a long way off the official combined figure of 47.1mpg. However, I love a challenge and given the chance, I think I could hit 50mpg without too many problems.

The engine glitches mentioned in the last report disappeared after a visit to the local dealer in Peterborough. Apparently, it needed a ‘software update’ and is now running perfectly.