DO you consider yourself Streetwise? Are you looking for something XTRa from your supermini? Perhaps you desire a Fusion between the attributes of two different types of vehicles.

Manufacturers have a few options open to them to Jazz up the conventional small car – the prevailing thinking involving a higher roofline, raised suspension and/or chunky plastic bumpers.

And with the growing popularity of these trendy urban runabouts, people who fail to appreciate the appeal of a taller, more robust-looking supermini have to ask themselves ‘YRV being so narrow minded?’ 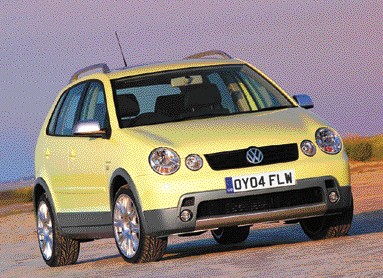 The elevated driving position as you twist the key in the Ignis-tion and set off allows a privileged view of the road and is A2-ly inspired solution to the compromises associated with driving a small car.

And if this style of including as many of these modified supermini concepts as possible is irritating, Dune know how difficult it is?

And if we’ve taken the trouble to include cars from Rover, Citroen, Ford, Honda, Daihatsu, Suzuki, Audi and Volkswagen, why not Mazda2? All right, that’s enough. Having exhausted the entire UK line-up of what Ford calls an ‘urban activity vehicle’, it’s time to focus on the latest entrant in the market and the subject of this test, the Volkswagen Polo Dune.

Looking a little like a Polo whose diet for the past few months has been cow pies – its stance is all square-jawed and with its plastic cladding a substitute for Desperate Dan stubble – the Dune is available in one high-specification model with the two options of metallic paint and a six-CD autochanger.

It towers over standard Polos with its raised suspension (the Dune is 20mm higher) and roof rails, and has darker rear light clusters. Inside there is a metallic finish to the steering wheel spokes and the pedals, and the wheel, gear knob and handbrake are leather covered.

We chose the 1.4 TDI for our excursion in the Midlands – the feisty little three-cylinder pumpe duse engine that powered the Polo we had on long-term test last year. Despite its extra height, the Dune seems quite stiffly sprung and doesn’t roll too much in cornering.

It means grip levels are pretty similar to a standard Polo, but you get the benefit of a better view of the road ahead. You get the same high-quality interior and the predicted residual value of the Dune is similar to the Volkswagen Polo Sport – according to CAP Monitor’s August figure, it will retain 38% of it value over three years/60,000 miles.

Fuel consumption is less than the 60mpg-plus offered in the standard Polo with this engine, so choosing the Dune you have to balance whether the perceived benefit of a pseudo-SUV in a very small package is enough to offset the slightly higher running cost.

I liked the Polo Dune but I don’t think I’d choose one or any other of its trendily named couterparts over a normal supermini. They aren’t any better to drive and are a bit more expensive.