IN theory, it is possible to drive from London to the south of France on a single tankful of fuel in the latest addition to Volkswagen’s Polo line-up.

The question is: would you really want to? The reason I ask is because the Polo BlueMotion is a car designed with one purpose in mind – to reduce the driver’s carbon footprint at the expense of performance.

The BlueMotion uses the familiar three-cylinder 1.4-litre TDI engine but a revised turbocharger has been bolted on to improve engine response from just above idle, while the higher gear ratios have been changed to maximise the Polo’s economy at motorway speeds.

Outside, a new front bumper, a more aerodynamic front grille and a rear spoiler help to channel airflow more efficiently over the body.

At least there are savings in VED bills. The BlueMotion will cost just £35 a year as it falls into Band B, while the regular Polo 1.4 TDI 80 will cost £115.

IF your company or drivers really want to make a statement about reducing their carbon footprint, the Polo BlueMotion is an ideal choice. But the financial savings will be fairly limited over the already frugal regular diesel Polo. 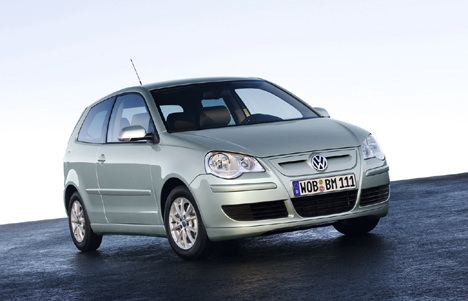 AS you’d expect from a car with such a frugal outlook, the performance isn’t much to write home about.

The revised gearing means that getting up to cruising speed takes a while, and you often need a gear lower than normal on roundabouts because there isn’t much torque.

But once you get used to keeping within the 2-3,000rpm sweetspot of the engine, progress becomes more acceptable.

The engine is also fairly noisy, even though no soundproofing has been removed in the conversion to BlueMotion.

The eco-friendly tyres also contribute to a supple ride. although spending 700-odd miles in one down to southern France wouldn’t be advised.