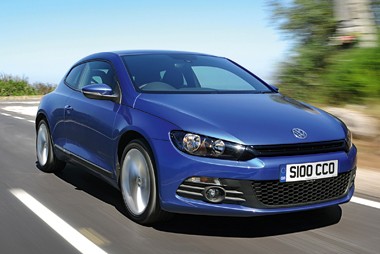 When Volkswagen launched the Scirocco last year the model ticked all the important boxes.

Stylish? Check. Affordable? Yes. Desirable? Certainly. And all of this with a petrol-only engine line-up. Now the Scirocco’s appeal has been further widened with the arrival of a diesel version.

As with the petrol range there’s the choice of standard or GT trim, the latter adding 18-inch alloys, dual-zone climate control and a multi-function steering wheel.

However, we’re sampling the diesel Scirocco in standard trim, which is still well equipped and is also £900 cheaper than the GT.

For the money you get 17-inch alloy wheels, air-conditioning, an MP3-compatible stereo with a colour touch-screen, as well as body-coloured bumpers and rear spoiler to complete the sporty look.

The Scirocco still looks sleek, even in standard trim, although the 17-inch wheels look a little lost under the arches compared with the way the GT’s 18-inch rims fill them out.

However, that muscular styling is still there, although it really is more sporty hatchback than the coupe Volkswagen insists it is. Whatever. On the road the Scirocco impresses with its secure feel and impressive low down acceleration.

The six-speed manual gearbox shifts cleanly, allowing you to dip into the puddles of torque at the bottom of the rev range and surf them up to motorway cruising speed.

On more twisty roads the Scirocco’s planted feel gives the driver plenty of reassurance in the front-end’s grip, while the ride finds a good balance, so long as you leave the standard-fit Adapative Chassis Control system in the default ‘normal’ mode – ‘sport’ makes the ride too jittery, while there’s little difference between ‘normal’ and ‘comfort’.

Inside, the Scirocco will be familiar to anyone who has driven a Volkswagen over the past couple of years, and this is no bad thing. Everything feels well made and is logically laid out, with the colour touch-screen in the middle of the dashboard helping to bring some light and colour to what can be quite a dark cabin.

This is because the rear window area tapers to the back, while the low roof line creates that cramped ‘coupe’ feeling. All of which is well and good, but it also means the Scirocco’s rear seats are a tight squeeze for anyone over four foot tall, and the boot is small for a car of this size. But for the target young market, the Scirocco delivers on all fronts.

All four models blend sporty styling with a diesel engine and all are well equipped. The Type S Civic looks good value and offers decent power (138bhp) while the Volvo is in the new R-Design trim which brings a substantial bodykit to the C30. The Megane Coupe has bespoke styling.Emissions and tax rates

With sub-£20,000 pricing and low emissions, all four are affordable in benefit-in-kind tax terms. For a base rate taxpayer, the Honda will be the cheapest in company car tax terms, costing £48 a month. The Renault will cost £53 a month, the Scirocco £56 and the Volvo £62.

With 18,000-mile service intervals and 16-inch wheels, the Renault scores well in SMR, undercutting its rivals by at least £570. The rest all run on larger 17-inch wheels, so tyre costs will be more. The Civic and Scirocco have variable servicing intervals, while the Volvo needs attention every 12,000 miles.Wholelife cost.

A tie for first place, with both the Megane and Scirocco claimed to return 55.4mpg on the combined cycle for a likely diesel bill of £4,860 over 60,000 miles. The Honda is close behind on a claimed 54.3mpg, while the Volvo fails to crack the 50mpg barrier, returning 49.4.

With the lowest fuel and depreciation costs the Volkswagen is way out in front, undercutting the second-placed Honda by £1,500. High fuel and SMR costs dent the Volvo’s challenge, while the new Renault’s low residual value prediction kills its chances.

A tie for first place, with both the Megane and Scirocco claimed to return 55.4mpg on the combined cycle for a likely diesel bill of £4,860 over 60,000 miles. The Honda is close behind on a claimed 54.3mpg, while the Volvo fails to crack the 50mpg barrier, returning 49.4.